As of December 28, 2,371 doses of Pfizer COVID-19 vaccine have been provided to health care workers in Regina as part of the initial pilot and in Saskatoon as part of Phase 1. 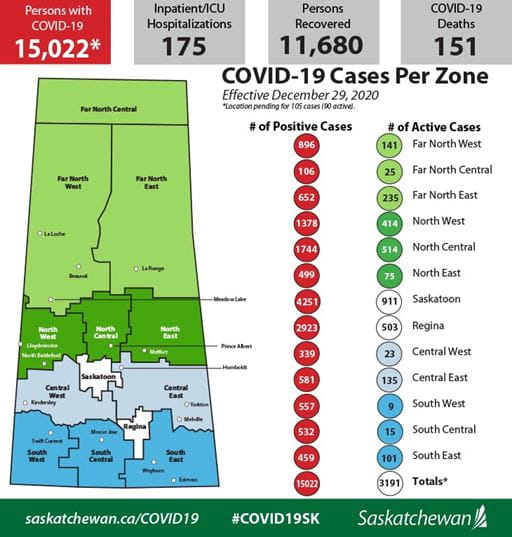 The seven-day average of daily new cases is 154 (12.7 new cases per 100,000 population) and is now available on the Government of Saskatchewan website.  This chart compares today’s average to data collected over the past several months.  Please visit https://dashboard.saskatchewan.ca/health-wellness/covid-19/seven-day-average-of-new-covid-cases.

The Saskatchewan Health Authority is expanding drive-thru testing hours in Regina and Saskatoon.  Effective January 2, the Saskatoon site will be open seven days a week, while the Regina site will have expanded hours, opening each day at 11:30 a.m.  More information can be found at https://www.saskhealthauthority.ca/news/releases/Pages/2020/December/Regina-and-Saskatoon-Drive-thru-Testing-to-expand-in-January.aspx.

Please be aware that the COVID-19 drive-thru testing sites have modified their hours for the holiday season. Please check the Government of Saskatchewan website for dates and times for drive-thru testing between now and January 2:
https://www.saskatchewan.ca/government/health-care-administration-and-provider-resources/treatment-procedures-and-guidelines/emerging-public-health-issues/2019-novel-coronavirus/testing-information.

The daily provincial case information, including news release and dashboard, will be posted through December 31, but an update will not be available January 1. Case information from January 1 will be included in the next, scheduled information posting on January 2.

For more information on the current public health measures or to see the Public Health Order, visit www.saskatchewan.ca/covid19-measures.