In 1995, the Government of Saskatchewan established a decoration to recognize the volunteer sector on the occasion of the province's 90th anniversary: the Saskatchewan Volunteer Medal. Saskatchewan has the highest rate of volunteerism in Canada.  Each volunteer reaches outside his or her personal activities to help others and make daily life in our province better for everyone.  Formal recognition of volunteers is a way both of expressing the gratitude of the community and of presenting role models to the people of the province.

While the Saskatchewan Order of Merit, established in 1985 as the province's highest honour, does recognize volunteer or community service, this is only one among many fields of endeavour for which the Order is bestowed.  Prior to 1995 the volunteer sector in Saskatchewan was not adequately recognized by the provincial government. 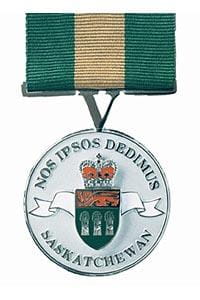 Designed by Jack Glasser of Regina, winner of a provincial competition.

The Saskatchewan Volunteer Medal is silver, circular in form, and suspended by a V-shaped clasp from a ribbon of green and gold, the provincial colours.

Recipients also receive a circular silver lapel pin displaying the Saskatchewan shield of arms superimposed on a "V," a certificate, and are entitled to use the post-nominal letters S.V.M. The medal is presented by the Lieutenant Governor in an annual ceremony.

The names and photos of the recipients of the Saskatchewan Volunteer Medal are displayed adjacent to the Athabasca Gallery on the second floor of the Legislative Building.

Any Canadian citizen who is a current or former long-term resident of Saskatchewan is eligible for nomination for the Saskatchewan Volunteer Medal.

Any individual or group may submit nominations. The Saskatchewan Honours Advisory Council recommends recipients based entirely on the information submitted with the nomination.

Only one nomination form is required per nominee.

Please provide three to six letters from others in support of the nomination, explaining why your nominee is worthy of this honour. Do not exceed six letters. They must be on 8-1/2 x 11" paper, typed or clearly hand-written in dark ink.

You may provide material in support of your nomination. Please ensure that this material is succinct and directly relevant to the nomination. All support materials must be on 8½ x 11" paper, typed, reproduced or clearly hand-written in dark ink.

Nominations are accepted year-round; the deadline is November 19th.Nominations received after this date will be considered the following year. The person submitting the nomination must sign nomination forms.

All information provided to us is confidential and exclusively for the use of the Honours Advisory Council. We ask that you not inform the nominee of his or her nomination.

You will receive an acknowledgement for your nomination in 14 days. Noëla Bamford’s volunteerism has spanned five decades. She has served on the boards of the YWCA and the Regina Symphony Orchestra. Her support of St. Paul’s Cathedral included founding its junior choir. Noëla also co-founded Juventus Choir and Prairie Chamber Choir. Her volunteer work has been varied and expansive, including the Canada Summer Games, the Royal Red Arabian Horse Show and Girl Guides of Canada. To encourage dialogue around social justice issues and the role that the arts play in building and sustaining communities, Noëla brought members of the Recycled Orchestra of Ceterua to Regina. She currently volunteers with the Health Arts Society of Regina, organizing professional music concerts for care homes, nursing homes and hospitals. . There are very few Churchbridge community projects for which Bob Bjarnason has not volunteered. He is a lifetime member of the Lions, having been active for over 43 years. Bob coached minor hockey and minor ball for 14 years, served for 10 years on the hockey arena’s board of directors and led the community’s seniors hockey team. His professional electrician skills have benefitted many community projects, such as the building of the curling rink, Trinity Lutheran Church, the fire hall and the change rooms in the community pool. Bob has also raised money for many projects including the curling rink and golf course and donates his time to the Churchbridge Cemetery Committee and the Churchbridge in Bloom program. Velma Harasen’s volunteerism has had local, provincial and international reach. Velma has served as a local parish council president, provincial president and national president of the Catholic Women’s League. She also served as the North American Vice President of the World Union of Catholic Women’s Organizations. Velma participated in the creation of the Catholic Women’s Leadership Foundation and has served on its board. Her work in these organizations helped raise funding for clean water projects in Senegal and the Philippines and supported two projects in the Holy Land. Velma has also given her time to the Regina Symphony Orchestra, Santa Maria Senior’s Home, the Canadian Club, the Saskatchewan Roughriders and organizations dedicated to palliative care and women’s shelters and refugee settlement. Keith Inches’ volunteer activities have benefited many communities in Saskatchewan. In Lajord, he organized a Youth Marksmen Club, taught Sunday school and volunteered with the curling club. Keith gave his time to church activities in Canora, Francis and Radville. In addition to serving as a senior officer in the Canadian Army (Reserve), Keith volunteered with the Royal United Services Institute, Royal Canadian Artillery, the Royal Regina Rifles Regiment and the Royal United Services Trust Fund. He was active with the Air Cadet Squadrons in Biggar and Canora. He was also the treasurer of St. John’s Ambulance and the University of Regina Alumni Association and served on the board of the Duke of Edinburgh’s Awards. Keith has devoted thousands of volunteer hours as curator of the Saskatchewan Military Museum. As a University of Saskatoon Cellular, Physiological and Pharmacological Sciences student and a Chancellor Scholar, Ishita Mann still finds time to devote herself to volunteerism. She is the founder and Chief Executive Officer of Youth Helping Youth Saskatchewan Inc. (YHYSK) which offers career mentorship, advice and community involvement opportunities to support students’ academic and professional journeys. Ishita was inspired to start YHYSK upon noticing that her peers could not find credible resources for their futures. She also volunteers for Jack.org, the Amal Club and Arts and Sciences Students Union. In the past, Ishita has volunteered for the Battleford Union Hospital, the Boys and Girls Club and spearheaded a Meals on Wheels project during the pandemic. Cathy Sarich is a dedicated volunteer for youth and sports in Saskatoon. She served as a Cadet Squadron Captain for 17 years. Cathy serves on the board of directors for the Saskatoon Zoo Foundation, Canadian Forces Liaison Council and previously the 4-H Saskatchewan Youth Leadership. Cathy is an ambassador for football in Saskatoon and was parent liaison for the Saskatoon Hilltops and equipment assistant with the University of Saskatchewan Huskies. She held volunteer leadership positions for the 2014 and 2011 Football Canada Cup, 2013 Memorial Cup, 2012 and 2013 CIS University Cup and 2012 Tim Horton’s Brier. Cathy has given her time to Football Saskatchewan, Habitat for Humanity, Children’s Hospital Foundation, United Way and Heart and Stroke Foundation. She served as Aide-de-Camp to two Lieutenant Governors. Bob White has made significant contributions to the community of Rosetown. He has volunteered to the 4-H Club and high school volleyball for decades. He is a board member of the Rosetown Museum and helps organize the yearly Tea House and Harvest Family Festival. He also started the Seedling Adventures Community Garden on the museum grounds. Bob helped create the Citizens on Patrol program and volunteers with the Emergency Measures Organization. Some of Bob’s most significant impact has been in his dedication to youth in the community. Bob spearheaded the Rosetown Youth Drop-In Centre where teens in the area can spend their free time. He also volunteers for the Sun West School Division’s mental health and addiction awareness programs for youth. Joyce Willick is a volunteer who inspires many in her community of Spiritwood. In addition to having been the Spiritwood arena’s caretaker and Zamboni driver for almost 40 years, she dedicates her volunteer efforts more widely within her community. Joyce is a member of the Spiritwood Skating Club and has been an organizer for its carnivals. Over the years she has volunteered for or played on local hockey and softball teams. Joyce is active with the seniors group and participates in its gold tournaments. She was the coordinator for the Spiritwood tourist booth, run by the seniors group. Joyce remains active in her church. Elaine Wirtz has dedicated herself to vulnerable populations in her community for over 40 years. Since 1981, she has been a board member of Mallard Diversified Services Inc. (MDSI), a non-profit organization that assists adults with intellectual disabilities. Elaine served as chair of the organization for 34 years, leading significant projects such as creating businesses that employ MDSI clients and procuring vehicles that have allowed the clients to travel. She has also held a volunteer position with the Wadena Housing Authority for 28 years. Elaine’s dedication to these organizations has given them the stability required to thrive. She has also volunteered at the local museum and was a dedicated supporter of her children’s activities.