Wildlife is defined as a vertebrate animal of any species that is wild by nature in Saskatchewan, or any exotic wildlife that is non-native to the province. This does not include fish or invertebrates such as insects or spiders.

Captive Wildlife is defined as any wildlife held in captivity by any person or organization.

This growing interest in exotic wildlife as pets and the rehabilitation of native species has raised new concerns for public safety and integrity of ecosystems. The increasing concern requires more effective regulations to ensure regulations target animals posing a high risk.

Amendments to regulations focus on areas of highest risk to people and the environment, decrease the amount of administrative oversight/permitting and create greater consistency of application of the regulations.

The province engaged with an expert panel and stakeholder groups on revisions to The Captive Wildlife Regulations, 2021 in order to modernize various aspects of the legislation including the list of species that can be held without licensing and the licensing requirements for people or facilities that hold restricted wildlife in captivity.

The captive wildlife expert panel developed and used the following risk criteria and considerations to evaluate the appropriateness of species of wildlife to be kept in captivity. It includes the following factors: 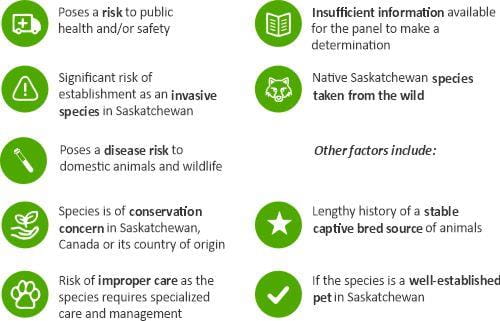 The review of hundreds of species resulted in the modernization of an Allowed list of species that can be held for personal possession without permitting requirements and a Restricted list for species that may only be held by qualified individuals or facilities appropriate for the species.