Lyme disease is an infection transmitted to people through the bite of a blacklegged tick infected with the bacterium Borrelia burgdorferi. Lyme disease is a serious illness that may affect the joints, the heart and nervous system resulting in long-term illness. However, if treated early with the appropriate antibiotics, most people with Lyme disease will completely recover.

If you think you have Lyme disease, contact your health care provider.

The risk for Lyme disease is very low in Saskatchewan, but not zero.

Between 2008 and 2020, 33,970 ticks were collected and identified in Saskatchewan, and only 90 were blacklegged ticks. Of these 90, only 13 blacklegged ticks tested positive for the bacterium that causes Lyme disease.

Blacklegged ticks are spreading elsewhere in Canada. Established populations of blacklegged ticks have not been identified in Saskatchewan but infected ticks may be dropped off by migrating birds. People may be exposed to blacklegged ticks in wooded areas as well as brushy, overgrown areas between woods and open spaces.

The adults are quite small (about the size of a sesame seed) and the immature stages are even smaller (the size of a freckle or a pinhead). 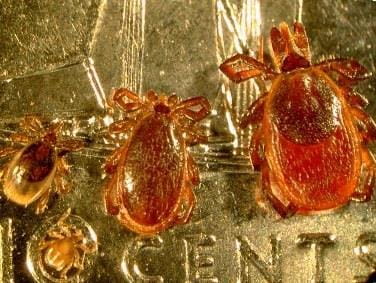 Ticks can transmit the bacteria regardless of what stage they are at in their life cycle. You may not know you have been bitten, since ticks are very small and their bites are usually painless. See below for precautions to take to prevent tick bites.

Ticks are active when the weather warms up (temperatures higher than 4°C) and remain active until freeze-up occurs. Since adult blacklegged ticks are active in the spring and fall months, and nymphs are found in the late spring and summer, the risk of being bitten by a tick can exist for the entire spring, summer and fall period.

Tips on how to remove a tick

Ticks are found in tall grass, brush or wooded areas throughout southern Saskatchewan.

When returning from outdoors:

If you find a tick attached to your skin:

Symptoms of Lyme disease vary and may develop days or weeks after a person is infected from a tick bite. Early symptoms may include:

Getting a diagnosis of Lyme disease can be difficult as your symptoms may be similar to other illnesses. Inform your health care provider of any travel outside of the province and whether you have developed a rash around a recent tick bite.

Prevention and early diagnosis of Lyme disease are important. Consult a health care provider as soon as possible if you think you may have Lyme disease. The earlier you receive a diagnosis and treatment, the better your chances to make a full recovery.

Your health care provider should:

The Roy Romanow Provincial Laboratory (RRPL) follows testing guidelines set out by the Canadian Public Health Laboratory Network. The testing involves a two-step process that includes an initial screening blood test followed by confirmatory testing at the National Microbiology Laboratory (NML) in Winnipeg. This is considered to be the best diagnostic testing for Lyme disease, and needs to be used in conjunction with clinical information about the patient.

Positive test results from laboratories in the United States or Europe that do not use methods validated by organizations such as the US Centers for Disease Control and Prevention or the International Organization for Standardization, should in general be confirmed through repeat testing through the RRPL. This ensures that Canadians are all diagnosed by laboratory tests according to recognized international standards.

Treatment is most successful in the early stages of the disease and involves a course of antibiotics for two to three weeks. Some people may experience symptoms that last months to years after treatment with a condition known as post-treatment Lyme disease syndrome (PTLDS). Symptoms can include:

Information on Lyme disease is also available on HealthLine Online by typing Lyme Disease in the health topic search.

4. Submitting Ticks for Identification and Testing

As of April 1, 2020, you can submit photographs of ticks for identification on the web-based platform, eTick, by following these steps:

Researchers at the University of Saskatchewan will use these photographs to identify the tick species.

Following confirmation of the species, you will receive timely public health information about your risk of exposure to tick-borne diseases.

Please keep your tick in a secure container. Researchers may ask you to submit ticks, by mail, for quality control purposes or if the tick species is one of medical concern. Mail-in tick submissions, unless requested by eTick administrators, will no longer be accepted.