Many producers experienced cool, damp weather this past week which halted or slowed their harvest operations until conditions improved. Other producers that were able to continue either finished their harvest or are very close to doing so. Harvest progress for the province is at 73 per cent, up from 64 per cent last week and ahead of the five-year (2017-2021) average of 68 per cent. An additional 18 per cent of the crop is ready to be swathed or straight-cut.

Precipitation was generally welcomed after several weeks of dry weather. Concerns about field and equipment fires have eased and there is hope that the rain will be enough in some areas to allow pastures a little regrowth. The Pelly area received 44 mm, the Melfort and Moosomin areas 30 mm, the Lipton area 13 mm, the Rosetown area nine mm and the Vanguard area four mm. 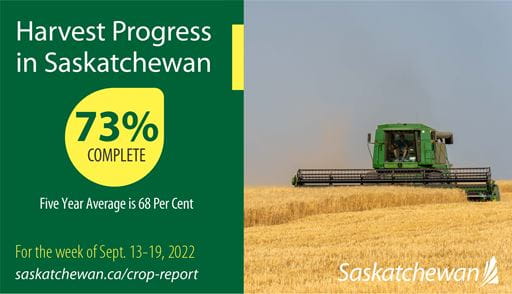 Pasture conditions are rated as four per cent excellent, 23 per cent good, 31 per cent fair, 25 per cent poor and 17 per cent very poor. Conditions vary across the province, with the southeast, east-central and northeast regions in good to excellent condition due to rainfall in the spring and throughout the summer that helped maintain pasture grass.

The majority of crop damage this week was due to wind, waterfowl, wildlife and lack of moisture. There were several reports of hard frosts across the province but producers say damage is low due to crops being so well advanced. The recent rain will likely cause some minor downgrading to standing or swathed cereal crops due to bleaching.

Producers are busy wrapping up harvest, hauling bales, moving cattle home or to market, hauling water and engaged in post-harvest field activities such as herbicide application.