The weather over the past week was excellent for harvest. The province now has 90 per cent of the crop in the bin, up from 81 per cent last week and well ahead of the five-year average of 82 per cent. Some producers have been struggling with heavy fog and dew in the mornings that has delayed their harvest activities until the afternoon, making for short days and less progress. High humidity in many parts of the southeast, east-central and northeast is making it difficult to combine and has also led to grain coming off at higher amounts of moisture than normal. Producers must dry down the grain in order to store it properly.

Harvest in the southwest and west-central regions is virtually complete with mostly flax waiting to be harvested, which will likely occur after the next heavy killing frost. The northwest has 94 per cent of their crop off, the northeast 87 per cent, the southeast 86 per cent and the east central 81 per cent. 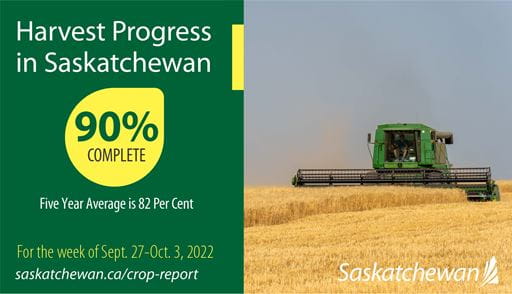 Once again, there was very little rain this past week, with only trace amounts being recorded for most regions. Some parts of the southwest received two to three mm but it did very little to improve soil moisture conditions. All areas of the province are reporting that they are either extremely dry or becoming drier each week. This includes the southeast and east-central regions, which started the season with an abundance of moisture.

The majority of crop damage this week was due to wind, waterfowl and wildlife. Wind continues to impact unharvested crops by blowing swaths around, as well as shelling out crops and causing lodging.

Producers are busy combining, hauling grain and bales and moving cattle. Some producers are also starting other fall field work, such as post-harvest weed control and harrowing. Winter cereals are not able to be planted in many areas due to the lack of soil moisture. Fall fertilizer applications are also not possible in many regions due to these dry conditions.

This will be the last Crop Report until the final report is issued October 20, 2022. This will allow time for appropriate information gathering and preparation until harvest is completed.