Saskatchewan's economy remains strong, with Statistics Canada reporting today that merchandise exports increased by 54.7 per cent in August 2022 compared to August 2021, ranking first among the provinces.

"Today, in a world where energy and food security are a leading concern, Saskatchewan is confidently playing its part as a critical, indispensable supplier of food, fuel, fertilizer and technology," Trade and Export Development Minister Jeremy Harrison said. "These latest merchandise export numbers show that exports remain a crucial part of Saskatchewan's current and future economic strength." 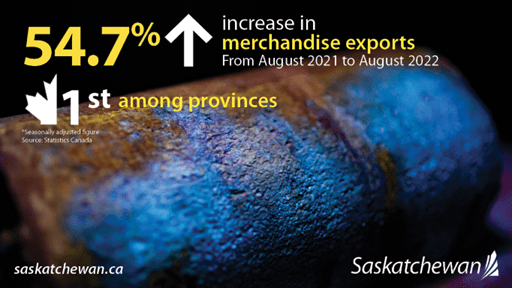 In the first eight months of 2022, Saskatchewan's merchandise exports increased by 44.3 per cent, the second highest increase among the provinces. The value of exports in August was $4.51 billion.

Metal ores, non-metallic minerals and energy products led the year-over-year export growth, with increases of 174.1 per cent and 55.3 per cent respectively.

Recently, Saskatchewan has led the nation in several other key economic indicators, including investment in building construction, which jumped by 81.8 per cent between July 2021 and July 2022, and wholesale trade growth, which jumped 72 per cent in July 2022 compared to July 2021.