Seeding progress climbed throughout many regions in the past week, despite a storm that brought snow and rain to parts of the province. Fifty-two per cent of the 2022 crop is now seeded, up from 33 per cent last week. This is still behind the five-year average (2017-2021) of 78 per cent for this time of year. The rainfall received over the past week in drier areas will help improve soil moisture conditions and establishment of early seeded crops.

The east received significant amounts of precipitation. The Hudson Bay area reported 88 mm, the Jedburgh area 85 mm, the Rama area 83 mm, the Indian Head area 32 mm and the Biggar and Cando areas 11 mm. While rain is welcome in the eastern half of the province, many producers are eager to continue their seeding operations. 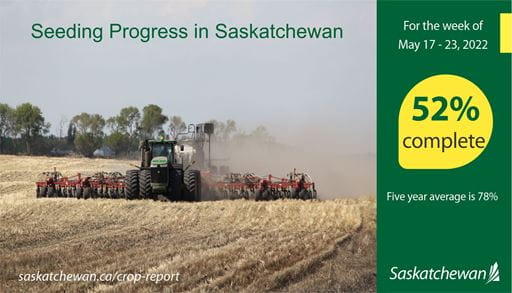 Pasture conditions are rated as 10 per cent excellent, 27 per cent good, 36 per cent fair, 16 per cent poor and 11 per cent very poor. Pastures in the western half of province are struggling to establish this spring due to very limited precipitation causing many livestock producers in the area to continue to feed cattle on farm.

Earlier seeded crops have started to emerge where moisture is sufficient, but cool weather over the past week has slowed development of many crops. In general, most crops are rated as normal for their development except for canola, which was rated as 67 per cent behind. This is likely due to the extremely dry conditions in the southwest and west central regions, delaying growth and the recent cool weather across the whole province. Most of the crop damage this week was due to minor flooding, light frosts, drought conditions and flea beetles. Producers continue to report that there is a shortage of farm equipment parts. There are also some reports of input and herbicide shortages throughout the province.

A complete, printable version of the Crop Report is available at https://www.saskatchewan.ca/crop-report.