Large amounts of rainfall are generally improving topsoil moisture and pasture conditions in the province, while also delaying seeding, particularly in the eastern half of the province. Producers who have been able to get in the field are making good progress, with 33 per cent of the 2022 crop now in the ground. As this is behind the five-year average (2017-2021) of 53 per cent, producers are hoping for some warm days to allow field work to advance.

Fifty-nine per cent of lentils, 57 per cent of field peas, 51 per cent of durum, 29 per cent of spring wheat and 27 per cent of barley have been seeded to date. Barley, peas and lentils have begun sprouting throughout the southwest and west central regions. 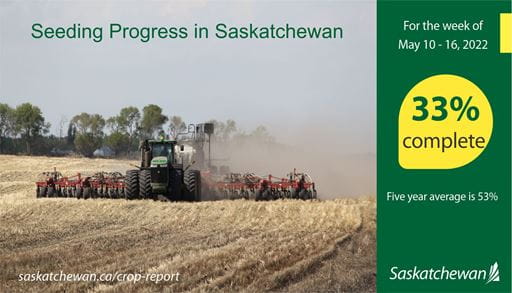 A significant weather system moved across the province in the latter half of the week, bringing lots of rainfall in some areas. The Estevan area reported more than 120 mm over two days, the Weyburn area 92 mm, the Big Beaver area 87 mm, the Moosomin area 75 mm and the Eyebrow area 35 mm. Many parts of the southwest, west central and northwest did not receive significant amounts rainfall and rain would be appreciated once seeding concludes.

Producers with overly saturated fields are starting to heavy harrow in attempts to dry their soils out faster. Producers who can are seeding as fast as possible between rains to avoid any further delays. Wind and cool daytime temperatures have hampered spraying activities for many producers in the province.