Seeding progress is still slower than average but more producers were able to get out over the past week. Provincially, 14 per cent of crops are now seeded, up from one per cent last week and behind the five-year average (2017-2021) of 23 per cent. Crops that were seeded over the past two weeks should be emerging if moisture conditions are favourable. In areas of the southwest and west-central regions where conditions are very dry, germination could be uneven.

Various amounts of precipitation were received across the province; this rain is needed badly in some areas that are too dry for proper germination. However, it will likely lead to longer delays in areas of the eastern regions where moisture is already high. The most rain reported was in the Pelly area with 49 mm, followed by 46 mm in the Bienfait area. The Shaunavon area received 26 mm and the Hazenmore area received 18 mm, which is good to see in the southwest since much of the crop is already in the ground and moisture has been limited in the region. 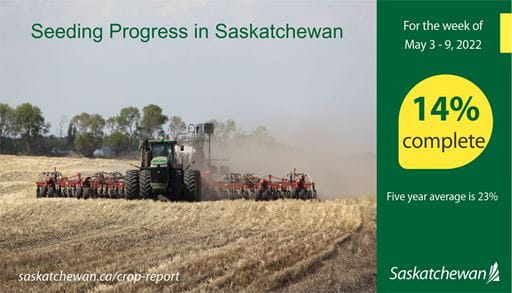 Many livestock producers have reported that the recent rain helped fill their dugouts and they feel confident that, for the time-being, water quality shouldn't be an issue. However, producers in the southwest and west-central have concerns about water levels and are making plans to haul water if conditions do not improve. Heavy rains throughout the summer will be needed to ensure that water availability does not become a widespread concern.

Producers continue working in their fields seeding, harrowing, rock-picking and rolling. When the weather allows, producers are spraying and seeding. Producers are reminded to be safe during their field activities and when transporting equipment across or alongside roadways. When working in extremely dry areas, especially pastures, ensure sparks or any other fire starter is controlled and a water source is available.