This new commemorative medal is being created to celebrate the 70th anniversary year of Her Majesty Queen Elizabeth's accession to the Throne.

"As we celebrate Her Majesty's 70 years of extraordinary service as Queen of Canada and Head of the Commonwealth, this commemorative medal enables us to pay tribute to The Queen's devotion to duty by recognizing Saskatchewan people who have also made service a priority," Mirasty said. "I look forward to celebrating the generous and impressive people of our province at medal ceremonies across Saskatchewan." 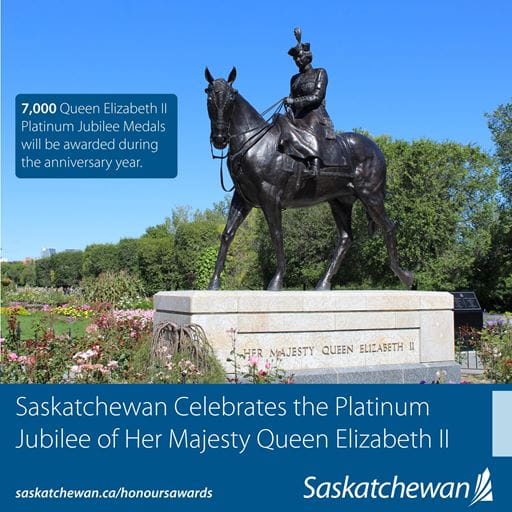 The Queen Elizabeth II Platinum Jubilee Medal program will honour significant contributions and achievements throughout Saskatchewan during this unprecedented anniversary year. Between June 2022 and February 2023, 7,000 medals will be awarded.

"Her Majesty has been an example of steadfast service to us all as Queen of Canada for 70 years," Premier Scott Moe said. "The Government of Saskatchewan is proud to have created this commemorative medal to recognize her reign and to acknowledge those in our province who continue to make Saskatchewan a great place to live, work and play."

This is Saskatchewan's second provincial commemorative medal. The first, the Commemorative Medal for the Centennial of Saskatchewan, was created to mark the centenary of the province in 2005.

The Queen's Platinum Jubilee is the international celebration marking the 70th anniversary of the accession of Queen Elizabeth II to the thrones of seven countries, including Canada, on February 6, 1952. She is the first monarch in Canada's modern era to have celebrated a Platinum Jubilee.  During her reign, The Queen has visited Saskatchewan five times, including in 2005 for the province's centennial.