Potash Sector Sets New Records in Production and Sales in 2021

The potash sector in Saskatchewan hit all-time record highs in 2021, with production reaching 14.2 million tonnes K2O and the value of sales hitting $7.6 billion.

"Saskatchewan continues to lead the world in the production of potash, which emits 50 per cent fewer emissions and is more sustainably produced here than in any jurisdiction in the world," Energy and Resources Minister Bronwyn Eyre said. "Over the past 15 years, the Saskatchewan potash sector has committed more than $30 billion of investment in mine expansions and new projects. It directly employs some 6,000 people and contributes to the livelihoods of thousands more." 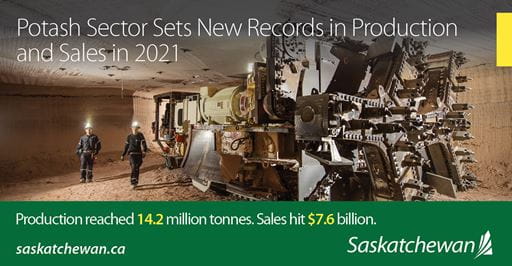 In August 2021, BHP announced that it was completing the Jansen potash mine for a total investment of $12 billion, the single largest economic investment in Saskatchewan's history.

One of the objectives identified in Saskatchewan's Growth Plan is to increase the annual value of potash sales to $9 billion. With the strong performance of the potash sector, Saskatchewan is poised to achieve this objective well before 2030.

As the sole producer in Canada, the Saskatchewan potash sector typically accounts for about 30 per cent of world production, which comes from ten mines operated in the province by K+S Potash Canada, The Mosaic Company and Nutrien Ltd.