Month-Over-Month Retail Trade Increased by 1.4 Per Cent in Saskatchewan, Highest in the Nation

Saskatchewan is once again leading the nation in a key economic indicator.

From March 2022 to April 2022, the value of retail trade in Saskatchewan increased by 1.4 per cent (seasonally adjusted), the highest increase among the provinces. 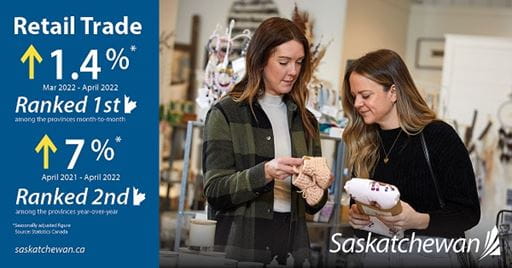 "Saskatchewan's retail sector is a vital part of our provincial economy, offering much needed goods, services and jobs," Trade and Export Development Minister Jeremy Harrison said. "Since the start of the year, Saskatchewan has consistently ranked in the top three provinces for annual retail sales growth, reflecting the continued strength of our economy."

Between April 2021 and April 2022, the value of retail trade in Saskatchewan increased by 7.0 per cent (seasonally adjusted), the second highest increase among the provinces.

In April 2022, the total value of retail trade in Saskatchewan was over $2 billion.

Saskatchewan has also led the nation in several other important economic indicators recently. In March 2022, year-over-year manufacturing sales increased by 44.6 per cent, the highest increase among all provinces. In April 2022, year-over-year wholesale trade grew by 29.4 per cent and urban housing starts increased by 43.6 per cent, the first and third highest increases in the country respectively.