Today, the Government of Saskatchewan revealed the design of the Queen Elizabeth II Platinum Jubilee Medal (Saskatchewan) after receiving approval of the design by Her Majesty at Buckingham Palace in London.

The commemorative medal celebrates the 70th anniversary year of Her Majesty Queen Elizabeth II's accession to the Throne.

"As the Commonwealth celebrates Her Majesty's Platinum Jubilee across the world over the next week, I am proud to unveil the design of the provincial Queen Elizabeth II Platinum Jubilee Medal," Premier Scott Moe said. "This commemorative medal allows us to recognize the service of Her Majesty Queen Elizabeth II while also recognizing the service of Saskatchewan people who have made contributions to their communities." 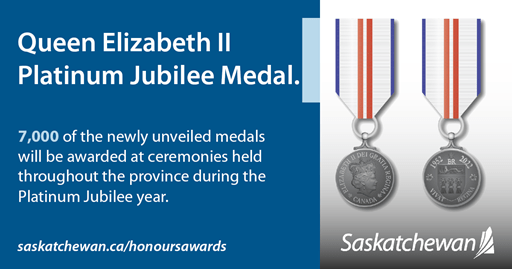 The medal features the crowned effigy of Queen Elizabeth II with her Canadian Style and Title on the front. The back of the medal includes the Saskatchewan Shield of Arms, separated by a pair of western red lilies (the provincial flower). The medal is suspended from a new arrangement of the blue, red and white ribbon used for Coronation and Jubilee Medals issued throughout The Queen's reign.

A total of 7,000 medals will be presented through the Platinum Jubilee year, which ends on February 5, 2023. The Government of Saskatchewan will partner with several organizations to distribute the medals to recipients across the province who have made contributions to Canada, Saskatchewan, or a particular region or community. Members of the Legislative Assembly will be given an allocation for their constituencies, and cities, SUMA, SARM, and New North have also been invited to participate in the program.

The Queen's Platinum Jubilee is the international celebration marking the 70th anniversary of the accession of Queen Elizabeth II to the thrones of seven countries, including Canada, on February 6, 1952. She is the first monarch in Canada's modern era to have celebrated a Platinum Jubilee.  During her reign, The Queen has visited Saskatchewan five times, including in 2005 for the province's centennial.