Today, Federated Co-operatives Limited (FCL) announced its plans to develop an Integrated Agriculture Complex (IAC) north of the Co-op Refinery Complex in Regina.  The IAC will include a renewable diesel facility, as well as a new canola crushing plant in partnership with AGT Foods.

The FCL renewable diesel production plant alone represents a nearly $2 billion investment for the province and is expected to create more than 2,500 construction jobs and 150 permanent operating jobs.  The entire IAC is estimated to have direct and indirect economic benefits of approximately $4.5 billion.

"This is a tremendous opportunity for Saskatchewan and for FCL and AGT Foods that will bolster the sustainability and economic goals of these companies and the province," Premier Scott Moe said.  "Our province has the food, fertilizer, and fuel the world needs, including renewable energy from canola grown and processed here, which speaks to the heart of our plan for economic recovery and growth as we work to build an independent, strong and sustainable Saskatchewan." 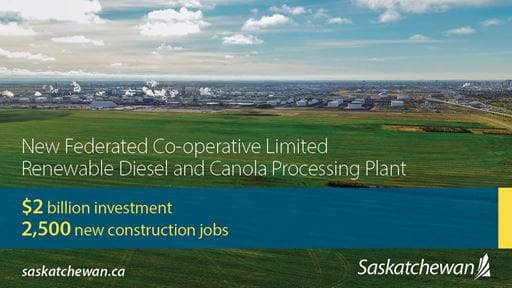 The FCL-AGT canola crushing facility will ensure Saskatchewan exceeds its 2030 Growth Plan goal of processing 75 per cent of the canola grown in the province.  It also supports the Growth Plan goal of increasing agriculture value-added revenue to $10 billion.

The FCL renewable diesel plant will have a production capacity of 15,000 barrels per day, or about 1 billion litres per year. The FCL-AGT canola crush facility will use 1.1 million tonnes of canola seed to produce 450,000 tonnes of oil, supplying approximately 50 per cent of the feedstock required for the renewable diesel plant, with the remainder of the supply being contracted from other canola crush facilities.

"We know the synergies between transportation fuel production and agriculture will play a vital role in Western Canada's transition to the low carbon economy," FCL CEO Scott Banda said.  "We believe our Co-op Retailing System is well-positioned to integrate and capture the full agricultural value-chain in the production of fuel and value-added products.  We are excited about our partnership with AGT and ultimately what this announcement means for value-added agriculture in our province."

With facilities and outlets in 249 communities in Saskatchewan, FCL and local co-ops employ more than 10,000 workers across the province.