Numbers released today by Statistics Canada show that Saskatchewan's merchandise exports increased by 57.3 per cent in June 2022 compared to June 2021, the second highest increase among the provinces on a seasonally adjusted basis. 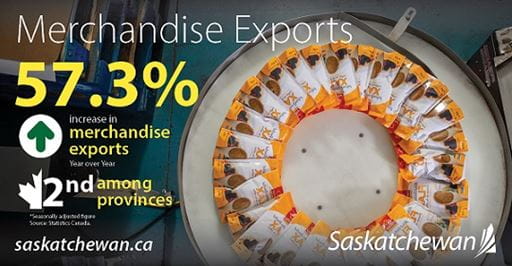 The value of Saskatchewan building permits in June 2022 also increased by 15.8 per cent from May 2022, ranking second in terms of percentage change among the provinces.

"The ongoing growth in both merchandise exports and building permits show how we are continuing to build a strong, autonomous Saskatchewan," Trade and Export Development Minister Jeremy Harrison said. "Exports abroad create jobs at home and investment flowing into our province leads to more infrastructure, buildings and homes being built here."

In the first six months of 2022, Saskatchewan's merchandise exports grew by 38.9 per cent compared to the same period in 2021, the second highest increase in the country. In the first six months of this year, the value of merchandise exports reached $24.4 billion, with metal ores and non-metallic minerals, energy products and aircraft and other transportation equipment and parts leading this growth. 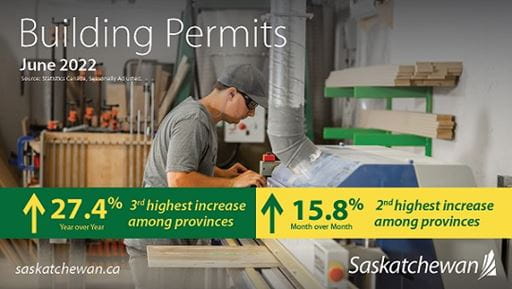 Recently, Saskatchewan has led the nation in several other key economic indicators, including investment in building construction, which jumped by 6.0 per cent between April 2022 and May 2022, and wholesale trade growth, which saw both month-to-month and year-over-year increases of 4.0 per cent and 44.0 per cent respectively in May 2022. Saskatchewan also continues to have one of the lowest unemployment rates in the country at 3.9 per cent in June 2022.