Harvest has just begun in the province. These few fields are mainly in west central and southwest regions where crops are further ahead in development. Parts of these regions received rainfall and this has delayed further harvest activities such as combining and desiccating. In the eastern regions harvest is at least seven-10 days away, since crops are behind in development and in some areas are just now beginning to fill with seed, although some earlier seeded crops are close to being ready for desiccation. 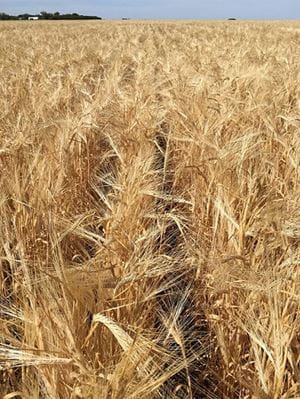 Rainfall varied significantly across the province last week with some areas getting nothing and others experiencing large, localized storms that resulted in flooding and crop damage. The Unity area received 53 mm, the Briercrest area 49 mm, the Avonlea area 40 mm, the Mayfair area 37 mm, the Lake Lenore area 24 mm, the Bulyea area 17 mm and the Swift Current area 9 mm.

After receiving much more rain than last year, pastures in some areas of the province have recovered from the 2021 drought and pasture condition ratings have improved tremendously. Pasture conditions are rated as 16 per cent excellent, 41 per cent good, 25 per cent fair, 12 per cent poor and 6 per cent very poor. Many pastures in the west still had cattle pulled off due to a lack of vegetation or dried up water sources.

The majority of crop damage this week was due to minor flooding, drought, disease, wind, grasshoppers and hail. Several storms crossed the province over the last week leaving behind some substantial crop damage. Some crops were laid down and lodged by strong winds and heavy rain while others were destroyed by hail. Hailstorms damaged crops from Marengo all the way to east of Lake Diefenbaker; buildings, machinery and vehicles were also damaged.