Year-Over-Year Retail Trade Increased by 13 Per Cent in Saskatchewan, Highest in Canada

Saskatchewan is leading the nation in year-over-year retail trade growth.

Between February 2021 and February 2022, the value of retail trade in Saskatchewan increased by 13 per cent (seasonally adjusted), highest among all provinces. 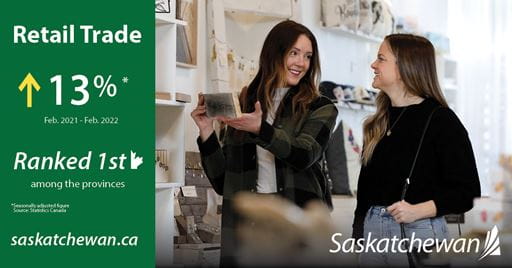 From January 2022 to February 2022, the value of retail trade in Saskatchewan increased by 2.4 per cent (seasonally adjusted), third highest among all provinces.

In February 2022, the total value of retail trade in Saskatchewan was over $2 billion.