The Government of Saskatchewan and Office of the Treaty Commissioner are coordinating official Treaty boundary signage in the province. The first signs marking the boundary between Treaty 4 and Treaty 6 Territory will be located along Highway 11 between Regina and Saskatoon in the Bladworth/Davidson area.

“We are proud to be the first province in Canada to officially mark treaty boundaries along major highways, working in partnership with the Office of the Treaty Commissioner to recognize the treaties.” Minister Responsible for First Nations, Métis and Northern Affairs Don McMorris said. “The boundary signage is an additional resource to support Treaty education and reconciliation in our province.” 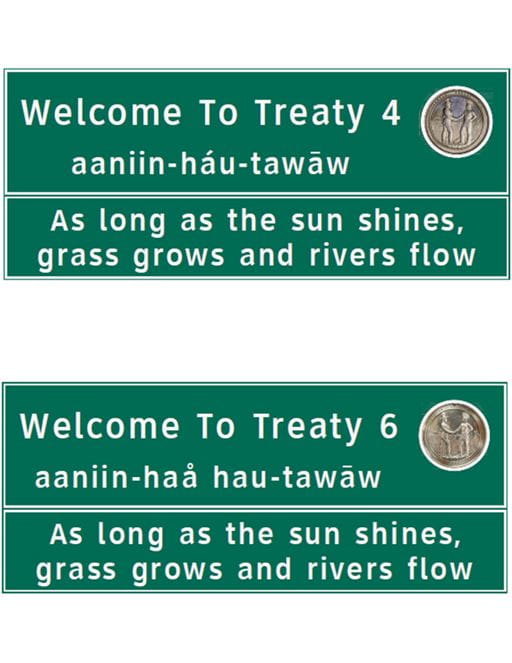 The Treaty Commissioner and provincial officials championed the design of the forthcoming signs that highlight the Treaty medals that were provided to Indigenous leadership following the close of the Treaty negotiations, and using the wording of the original Treaties to indicate they will remain valid "as long as the sun shines, grass grows and rivers flow." The design also features a welcome in the respective Indigenous languages of each Treaty area. This aligns with the province's efforts to recognize, acknowledge and revitalize Indigenous languages.

"A sign seems like such a small thing, but it represents something significant. Think about the number of Treaties that cross through where the province of Saskatchewan now lies. Our highways cross these territories and that has to be recognized and acknowledged," Treaty Commissioner Mary Culbertson said. "It is so important to see this project underway, we are starting with one sign, but hope to see this for all our Treaty boundaries."

The Saskatchewan Ministry of Highways is coordinating the production and installation of the signs, with a public unveiling and ceremony planned for later in 2022. This will make Saskatchewan the first province in Canada to mark Treaty boundaries along major provincial highways.