Little to no precipitation was received this past week allowing producers another week of good conditions to help wrap up the 2021 harvest. Producers in the southern regions are mostly finished their harvest and have shifted their focus to other fall field work. There are challenges with harvesting crops like canola and flax due to regrowth across all regions of the province. 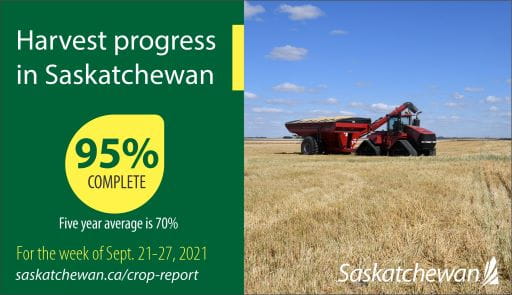 The lack of precipitation continued to negatively impact top soil moisture. The Arborfield and Luseland areas received 2.0 mm while the remainder of the province saw trace amounts or nothing at all. Producers are hoping their stubble and crop residues are enough to trap good amounts of snow over the winter to help restore some of their depleted soil moisture.

The majority of crop damage this week was due to wind, waterfowl and wildlife. Wind has continued to blow swaths around and shell out crops. There continues to be symptoms reported in the crops caused by lack of moisture and frost as well. At this point of the season frost will be helpful for producers who are struggling with regrowth in their fields as it will kill off green growth and reduce the need for herbicide applications.

Producers are busy combining, hauling grain, hauling bales, moving cattle and starting other fall field work such as post-harvest weed control and harrowing. Winter cereals are not able to be planted in many areas of the province due to the extreme lack of soil moisture. Fall fertilizer applications are also not possible in many regions due to the dry conditions. We would like to remind producers that Saskatchewan Crop Insurance Corporation (SCIC) provides compensation for damage caused by wildlife through the Wildlife Damage Compensation Program; you do not need to be an existing Crop Insurance customer to file a claim. If you do experience wildlife damage, please report it immediately by visiting the SCIC website or calling 1-888-935-0000.

With harvest underway in Saskatchewan, we want to remind producers to exercise caution and remain safe.