70 Per Cent of Saskatchewan Oil Moves Through Enbridge Mainline

The Government of Saskatchewan welcomes the news of the completion of the Enbridge Line 3 replacement pipeline, which stretches from Alberta, through Saskatchewan and Manitoba, to Wisconsin. 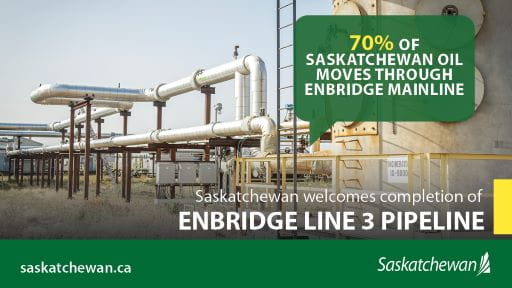 The 1,765 kilometre, Line 3 replacement pipeline is the largest project in Enbridge's history and includes state-of-the-art technology and safety measures. The completion of the project provides restored capacity of 760,000 barrels per day for shippers.

"This project is good news for Saskatchewan and its producers, as 70 per cent of our oil runs through the Enbridge Mainline, which includes Line 3," Energy and Resources Minister Bronwyn Eyre said. "Enbridge's completion of this major replacement project means we will now be able to safely and reliably move more oil to markets, while we continue to fulfill our Growth Plan 2030 target of increasing oil production in Saskatchewan by 25 per cent."

The Line 3 replacement project has already created many positive economic benefits, including for Indigenous communities in Canada. Over 1,100 Indigenous workers were employed over the course of the replacement and comprised 20 per cent of the overall workforce. Enbridge's project generated more than $400 million in economic benefits to Indigenous communities, including $116 million in direct wages. 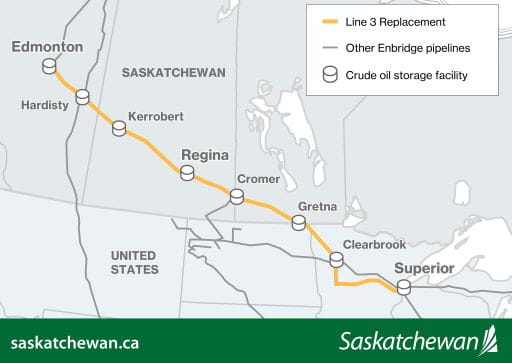 The Enbridge Mainline, which includes Line 3, connects at Superior Wisconsin to Enbridge Line 5, which then carries light crude and natural gas liquids under Lake Michigan and Lake Huron to the three refineries in Sarnia, Ontario.

The Saskatchewan oil and gas sector accounts for 15 per cent of Saskatchewan's GDP. It generated $5.9 billion in combined value of production in 2020 and more than 29,000 direct and indirect jobs in the province.