Today, the Government of Saskatchewan announced the approval of timber allocations to support the proposed expansion of the Dunkley Lumber sawmill in Carrot River.

"It's been a great week for the forestry sector in our province," Energy and Resources Minister Bronwyn Eyre said.  "Dunkley's Carrot River mill expansion will lead to significant growth in lumber sales and exports and is expected to create 240 new direct and indirect jobs, which is very positive news for northeast Saskatchewan."

“The announced allocation will more fully utilize Saskatchewan’s timber resources, providing significant benefits for forest communities and the province as a whole,” Environment Minister Warren Kaeding said.  “We will continue to ensure that all harvesting is done sustainably and in a manner that protects the long-term health of the forest ecosystems on which we depend.” 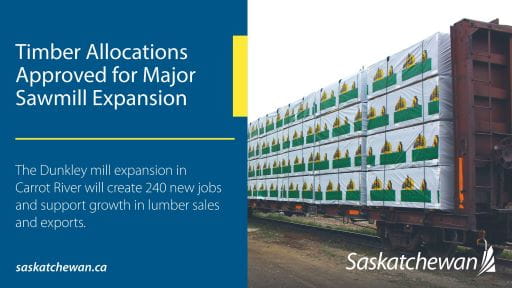 The $100 million expansion will increase lumber production capacity by 75 per cent, from the current 130 million board feet of lumber annually to 230 million board feet, requiring approximately 821,000 m3 of softwood timber.  The Government of Saskatchewan allocates timber through the Ministry of Energy and Resources under The Forest Resources Management Act.  While the province is allocating some of the additional timber required for this project, the majority of timber will be secured by the company through commercial agreements negotiated with Indigenous timber allocation holders and private landowners.

"Dunkley looks forward to completion of its sawmill expansion in Saskatchewan and appreciates the proactive approach by the provincial government in its mandate to grow the forest sector while meeting important sustainability objectives," Dunkley Lumber President Rob Novak said.  "The sawmill will add a second saw line and increase production over five phases of development by the fall of 2023.  Saskatchewan is clearly open for business and refreshing to work with.  We really appreciate the response from the province in the form of a timber allocation increase to help support our capital investments in Carrot River."

Dunkley is a privately owned Canadian forestry company with three sawmills in western Canada.  The Carrot River mill, originally constructed in 1976, was acquired by Dunkley in 2019 and operates as Edgewood Forest Products.