Today, job numbers released by Statistics Canada for August 2021 show Saskatchewan's unemployment rate fell to 7.0 per cent from 7.9 per cent a year ago, and below the national average of 7.1 per cent (seasonally adjusted).

Month-to-month seasonally adjusted employment increased by 10,100 (+1.8 per cent) from July 2021 and ranked first among the provinces in terms of percentage change, well above the national increase of 0.5 per cent.  Saskatchewan gained 16,800 jobs compared with the same period last year.  This represents an increase of 3.0 per cent. 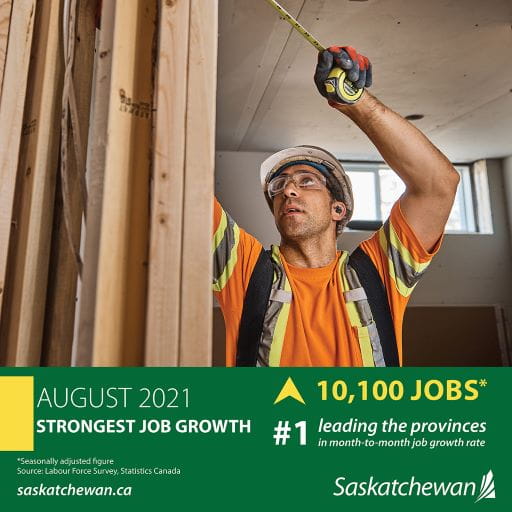 "Strong job gains is a positive economic indicator that Saskatchewan is leading Canada's economic recovery," Immigration and Career Training Minister Jeremy Harrison said.  "With over 9,000 jobs posted on saskjobs.ca, employers across the province are looking for workers to fill positions, which shows confidence in our province's recovery from the COVID-19 pandemic."

Saskatchewan's youth unemployment rate was 10.7 per cent, the third lowest among the provinces and below the national average of 11.6 per cent (seasonally adjusted).  Aboriginal youth employment also increased by 56.1 per cent for the fifth consecutive month of year-over-year increase.