Producers have made tremendous progress as 56 per cent of the crop is now in the bin, up from 36 per cent last week, ahead of the five-year (2016-2020) average of 35 per cent.  An additional 24 per cent of the crop is swathed or ready to straight-cut.  There were several areas affected by rain delays but the majority of the province was able to continue their harvest operations without issue. 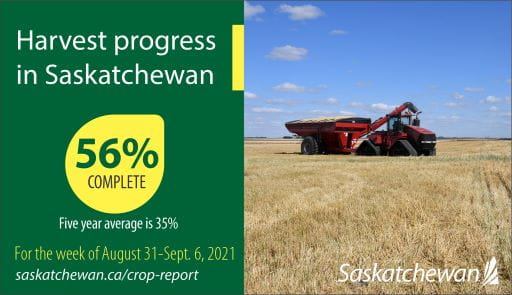 The majority of crop damage this past week was due to strong winds, drought and hail.  Areas that received precipitation over the past few weeks have reported that standing crops such as cereals and lentils have experienced severe weathering and are being downgraded at the elevator.  Some fields are in such poor condition that some producers have indicated they will not be harvested.

As of September 1, the AgriRecovery program, now referred to as the 2021 Canada-Saskatchewan Drought Response Initiative, is accepting producer applications.  The initiative will consist of two payments totaling up to $200/head for cattle, with adjustments based on animal unit equivalents for other livestock.  The initial payment will provide producers with $100 per breeding female equivalent in inventory as of August 1, 2021.  Secondary payments of up to $100 per breeding female in inventory as of December 31, 2021, will be made to producers who have incurred additional costs to retain the animals.  Producers with questions can call the initiative's dedicated toll-free number at 1-844-723-1211 or directly email skdri@scic.ca.

We want to remind producers to exercise caution and remain safe.  We ask motorists to remain vigilant and to exercise patience when travelling around or near farm equipment on the highway.