The southwest region continues to have the most progress in the province with 47 per cent of the crop now combined. The southeast region has 42 per cent combined, the west-central 36 per cent, the east-central 25 per cent, the northeast 34 per cent and the northwest 21 per cent.

Many parts of the province experienced scattered rain showers this week, varying from trace amounts up to 77 mm in the Limerick area.  The Macklin area received 51 mm, the Conquest area 40 mm, the Roblin area 35 mm, the Goodeve area 30 mm and the Rama area 28 mm.

Recent rains have helped green up pastures which might allow cattle producers to continue pasture grazing and save their winter feed stocks. 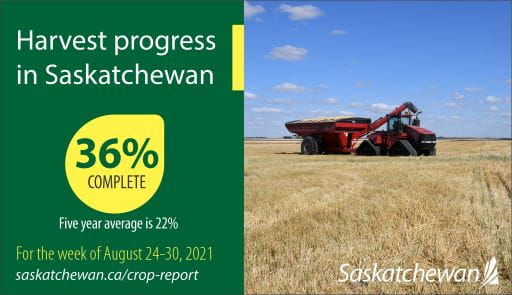 Most crop damage this past week was due to heavy rain, hail, strong winds, insects and the long-lasting effects of the drought.  The rain has caused downgrading of many crops still standing in fields; the biggest issues reported are bleaching, staining, sprouting, low kernel weights and fungal growth.  Reported yields are far lower than average for many parts of the province with some areas reporting some fields that have yielded almost nothing.

Producers are busy hauling bales and water as well as combining and swathing between rain showers.

As of Sept. 1, the AgriRecovery program, now referred to as the 2021 Canada-Saskatchewan Drought Response Initiative, is accepting producer applications.  The Initiative will consist of two payments totalling up to $200/head for cattle, with adjustments based on animal unit equivalents for other livestock.  The initial payment will provide producers with $100 per breeding female equivalent in inventory as of Aug. 1, 2021.  Secondary payments of up to $100 per breeding female in inventory as of Dec. 31, 2021, will be made to producers who have incurred additional costs to retain the animals.  Producers with questions can call the initiative's dedicated toll-free number at 1-844-723-1211 or directly email skdri@scic.ca.

With harvest underway in Saskatchewan, we want to remind producers to exercise caution while working out in the field.  Be aware, take breaks and remain safe.

The Farm Stress Line is also available for support 24-hours-a-day, seven-days-a-week, toll-free at 1-800-667-4442.  Calls are answered by Mobile Crisis Services Regina, a non-profit, community-based agency and there is no call display.