Harvest is practically complete in the province, with nearly all regions having 99 per cent of the crop in the bin. The five-year (2016-2020) average for harvest progress for this time of year is 79 per cent. Producers continue to do post-harvest work in the fields such as harrowing, weed control and preparing to or bringing livestock home. There have been reports that the dry soil conditions and recent cold temperatures have limited fertilizer and herbicide applications.

Harvest weather was favourable throughout the fall, allowing producers to harvest without major delays from rain or waiting for crops to mature. The season-long drought and extreme temperatures caused crop yields to be much lower than average; however, most crops were reported to be within the top two quality grades. Several small rain storms in early-September meant most of the province experienced regrowth in pastures and fields. This regrowth caused issues with harvest, especially in crops like canola. Producers had to apply herbicides or find other solutions in order to begin harvest. 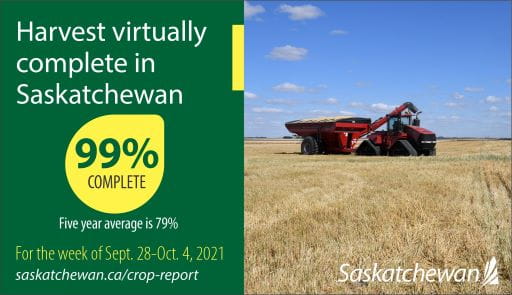 Moisture conditions remain a concern, with much of the province receiving minimal or below average rainfall this year along with hot temperatures and drying winds throughout the growing season. All regions in the province reported that their topsoil moisture was short or very short for most of the season.

At this time, most livestock producers indicated they will have inadequate to adequate supplies of hay, straw, greenfeed and feed grain heading into winter. Many areas in the province will have inadequate winter feed supplies and shortages are expected due to a poor first cut of hay and the inability to get a second cut. The late rains did allow for some pastures to briefly green up and extend grazing for one or tow more weeks.

Due to the dry conditions this year, dugout, slough and well levels have been low and there are concerns about livestock water supplies. Some producers were able to use crop residue and straw from their grain farming neighbours and use it as feed. The late rains allowed for some pastures to briefly green up and extend grazing for one or two more weeks.

With drier than normal field conditions this fall, the number of acres seeded to winter cereals is below normal. In most areas, winter wheat acres are estimated to fall 17 per cent, while fall rye is estimated to fall twelve per cent. With harvest wrapping up in most regions, there was adequate time for seeding but there were concerns with poor germination and establishment of winter cereals prior to winter due to the extremely low topsoil moisture conditions.

Producers were able to complete fall work such as fixing fences, moving cattle, hauling grain and bales, picking rocks, spraying weeds and working fields. Producers will continue to do this work until the temperature drops sharply or a big snowfall occurs.

Even as harvest winds-up in Saskatchewan, we want to remind producers to exercise caution and remain safe in their post-harvest operations.