The Ministry of Environment has designated the Lobstick Lake representative area as a new ecological reserve, helping to protect a large portion of Saskatchewan's land and water-based ecosystem. This designation will preserve the environmental integrity of the area and contributes to Saskatchewan's commitment of increasing provincial protected and conserved areas.

"Establishing the Lobstick Lake representative area will promote the conservation of valuable wildlife habitat in the area," Environment Minister Warren Kaeding said. "This designation will ensure the protection and further enjoyment of this land for many years to come." 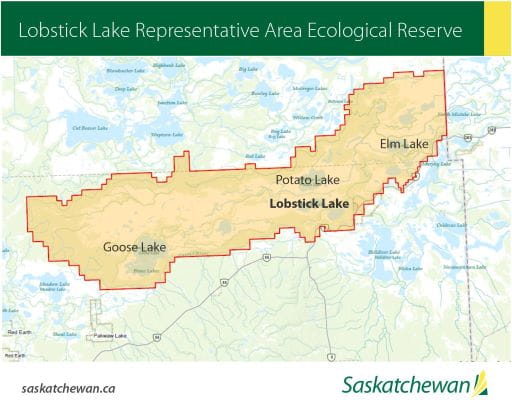 Located approximately 24 kilometres south of Cumberland House, the Lobstick Lake site is nearly 98,580 hectares (243,600 acres) and was previously identified as a protected zone. This designation is a direct recommendation of the Pasquia Porcupine Land Use Plan. Consultation with First Nations, area stakeholders and industry was an integral part of the process in preparing the Plan and finding the balance between conservation and development.

The Government of Saskatchewan established the Protected and Conserved Areas Network (PCAN) in response to national and international biodiversity conservation action planning. Government has committed to protecting 12 per cent of Saskatchewan's land base, with the addition of the Lobstick Lake representative area bringing provincial protected areas under PCAN to 9.8 per cent.

The Lobstick Lake representative area has been used by First Nations and Métis people for hundreds of years. The protected area is typical of the natural ecosystem range that occurs in the Mid-Boreal Lowland Ecoregion. It is composed of wetlands, lakes and river channels (active and abandoned) bordered by peat-forming fens and bogs.

Land uses in the area include fishing, hunting, trapping and tourism, as well as some industrial development, most notably peat extraction and forestry.