“Global demand for lithium is expected to grow five-fold by 2030, and Saskatchewan is well-positioned to make the most of its potential,” Energy and Resources Minister Bronwyn Eyre said. “Our energy and mining sectors are attracting investment, creating high-quality jobs and building on our traditional strengths. It’s exciting that lithium from Saskatchewan oilfield brine will power electric vehicles of the future.” 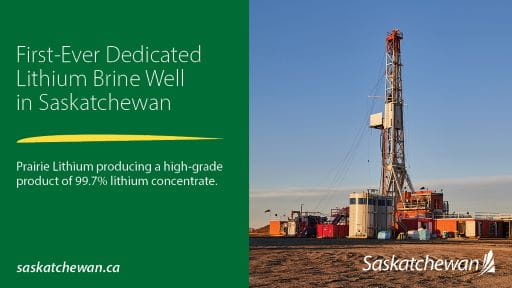 Since 2020, Prairie Lithium has been using proprietary technology to extract lithium from subsurface brine water. While drilling, the project supported over 100 jobs from 40 different companies. In Emerald Park, the company established a pilot project processing facility, which has successfully extracted 99.7 per cent of lithium from the brine in a matter of minutes. This fall, Prairie Lithium concluded drilling its first-ever dedicated lithium brine well in southeast Saskatchewan—the first well of its kind drilled in Saskatchewan.

Saskatchewan’s Growth Plan supports the development of the lithium sector and lithium extraction technologies. The Ministry of Energy and Resources’ Saskatchewan Geological Survey subsurface brine sampling program, which began in 2011, has also been instrumental in increasing sector interest in pursuing lithium projects in Saskatchewan. To date this year, sub-surface mineral public offerings, which target minerals including lithium, have raised over $4.2 million in revenue for the province.

“The support that we have received from the Saskatchewan Advantage Innovation Fund and Saskatchewan Petroleum Innovation Incentive have been critical to the development of our Direct Lithium Extraction technology,” Prairie Lithium President and CEO Zach Maurer said.

Lithium is identified as a critical mineral in the Canada-US Joint Action Plan on Critical Minerals Collaboration. Of the 31 minerals identified and considered essential for modern economies and which also have applications in clean and digital technologies, Saskatchewan currently produces three (uranium, potash and helium), and 22 of the 31 critical minerals listed are found in the province.