Two projects will reduce venting and flaring of methane gas

Today, the Government of Saskatchewan announced that two new oil and gas processing projects, undertaken by Steel Reef, have been approved under the provincial Oil and Gas Processing Investment Incentive (OGPII). Introduced in 2019 as part of the Government’s Methane Action Plan, OGPII is available for companies making investments in infrastructure and value-added processing projects, including ones that reduce venting and flaring of methane gas.

“These methane capture and commercialization projects will create local jobs and help grow our economy,” Energy and Resources Minister Bronwyn Eyre said. “They build on our energy strengths and are another positive win-win for the economy and the environment.” 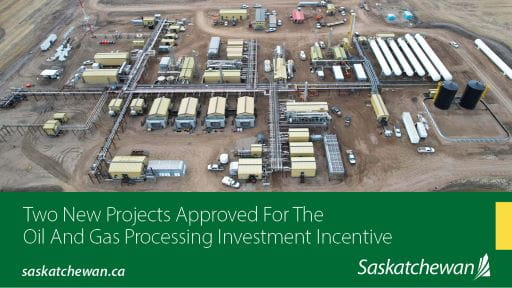 Steel Reef is also investing in a new fractionator adjacent to the North Portal Gas Plant, which will allow it to process natural gas liquids from its North Portal Gas Plant and other gas plants in the area into separated propane, butane, and condensate for direct access to local and export markets.

“This partnership with the Government of Saskatchewan is a key part of ensuring more associated gas is being captured, processed and brought to markets,” Steel Reef’s Chief Operating Officer Austin Voss said. “We are proud to deliver on our core purpose of enhancing the energy community by investing in infrastructure that prevents flaring and creates value for the province.”

Methane Action Plan is a made-in-Saskatchewan plan to reduce methane-based GHG emissions by 40 to 45 per cent by 2025 – the equivalent of taking up to 800,000 cars off the road for one year.

The OGPII program offers transferable oil and gas royalty/freehold tax credits for approved projects at a rate of 15 per cent of eligible program costs. Government investment follows up front private investment and so far, has successfully attracted over $200 million in private investment in Saskatchewan.