Today, the Government of Saskatchewan welcomed the announcement by Ceres Global Ag of its plans to build a new USD $350 million integrated canola crush facility at Northgate.

"Adding value to agriculture products right here in Saskatchewan will help us reach the goals set out in our Growth Plan," Premier Scott Moe said . "We welcome Ceres Global's investment in Northgate to support and provide southeast Saskatchewan growers with a unique and valuable option for marketing their canola.  With its direct connection to the BNSF railroad, Ceres can offer Saskatchewan growers access to a variety of markets in the United States."

Construction of the new 1.1 million metric tonne canola processing plant at Northgate is expected to begin in 2022 and will increase exports of value-added products via the direct connection to the BNSF Railway adjacent to the United States border. 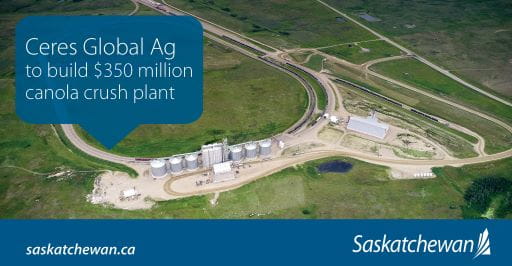 "With this investment by Ceres, our capacity for value-added production within our province will be further increased, producing more high-quality canola oil and meal for export to current and new markets around the world," Trade and Export Development Minister Jeremy Harrison said.  "This is good news for jobs and our economy in Saskatchewan, and this also supports our Growth Plan goal to increase agri-food exports to $20 billion in the years ahead."

In 2013, Ceres purchased 1,300 acres of land at Northgate to construct its commodity logistics hub, which was fully operational by 2015.  In September 2020, Ceres acquired the Nicklen Siding grain elevator in Ridgedale, Saskatchewan.

"Today's announcement by Ceres is an important step forward in growing our agriculture sector and ensuring our producers are able to keep more value from the commodities they produce," Agriculture Minister David Marit said.  "We are excited that Ceres has decided to locate their facility in Saskatchewan, joining the growing list of companies who recognize our industry for the high-quality and reliability that we are known for around the world."

"This is an exciting time for Ceres Global as we position ourselves to take advantage of the unprecedented demand for oilseed crush in North America," Ceres Global President and Chief Executive Officer Robert Day said.  "We have been analyzing canola crush at Northgate for several years as its location along the Canada-U.S. border is ideally located to originate canola seed from our farmer partners, and with a direct connection to BNSF Railway, it provides the most efficient access to the U.S. market and U.S. ports."