Statistics Canada today released job numbers for April 2021 which shows Saskatchewan had the lowest unemployment rate in Canada and led the nation in month-to-month job growth.

Month-to-month seasonally adjusted employment increased by 9,500 (+1.7 per cent) from March 2021 and ranked first among the provinces in terms of percentage change.  Saskatchewan gained 58,500 jobs compared with the same period last year.  This represents an increase of 11.9 per cent. 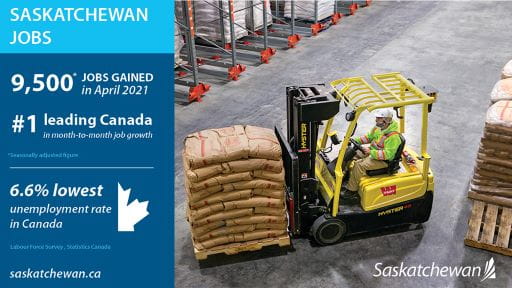 Saskatchewan was tied for the lowest unemployment rate in Canada at 6.6 per cent, down from 7.3 per cent in March and down from 11.2 per cent a year ago.  Saskatchewan's rate was well below the national average of 8.1 per cent (seasonally adjusted).

"Saskatchewan led the country in both job creation and unemployment rate in April, a month when most other provinces saw their job numbers decline and unemployment go up," Immigration and Career Training Minister Jeremy Harrison said.  "We are leading Canada's economic recovery having attracted recent large private sector investments worth billions of dollars that will create even more jobs and opportunity for Saskatchewan people."

For more information, including on COVID-19 support for businesses and workers in Saskatchewan, please visit: www.saskatchewan.ca/covid19-businesses.