Canadians everywhere have felt the impact of COVID-19 on their families, their livelihoods, and their way of life.  Canada and Saskatchewan have worked together to ensure health and safety, support families and businesses, and sustain local economies.  Investments in Saskatchewan's infrastructure during this extraordinary time provide an opportunity to make communities more sustainable and resilient in the long run, and to further develop our renewable energy resources.

Today, Jim Carr, the Prime Minister's Special Representative for the Prairies, on behalf of Catherine McKenna, Minister of Infrastructure and Communities, and  Saskatchewan's Government Relations Minister Don McMorris, announced more than $53 million in joint funding for 24 recreation and green infrastructure projects in Saskatchewan.

Recreation infrastructure projects include improvements to arenas, swimming pools and outdoor facilities, which will give residents of all ages access to safe, modern, and ecofriendly facilities to stay active and interact with other community members.

Two solar energy projects, including the Awasis Solar Project on land owned by Cowessess First Nation southeast of Regina, will supply clean energy directly to the Saskatchewan electrical grid.  SaskPower is also set to implement a battery energy storage project that will help to balance the power system during power demand spikes and support intermittent generation options such as wind and solar.

Moreover, investments in water and wastewater infrastructure in several Saskatchewan municipalities will improve capacity to meet current and future demand while ensuring continued compliance with provincial and federal regulations. 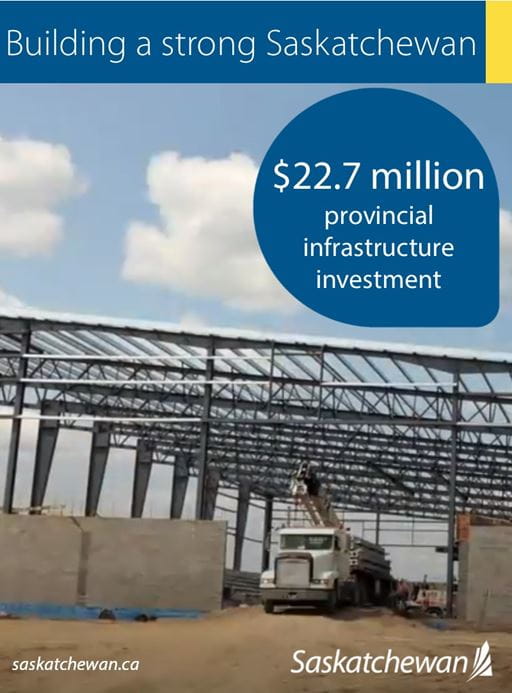 Providing communities with reliable, ecofriendly, and sustainable infrastructure is a shared priority for both governments.  The Government of Canada is investing more than $31.1 million in these 24 projects through the Investing in Canada plan, with the Government of Saskatchewan providing more than $22.7 million.  Contributions by recipients toward their respective projects are more than $7.2 million.

"From swimming pools to solar projects, the Government of Canada is taking actions to support families, businesses, and the economy in Saskatchewan and across the country now, so that we can build resilient communities for years to come," said Carr.  "The funding announced today will help communities build back better, create jobs, and build cleaner, more inclusive communities."

"The Government of Saskatchewan is investing more than $22.7 million toward these important projects, which will improve recreational facilities, upgrade water systems, support renewable energy and help protect the environment," McMorris said.  "It's infrastructure that will help build better communities, create jobs, and improve quality of life for those who call this great province home."

"Our community appreciates the funding commitments from the Government of Canada and the Government of Saskatchewan to help make our wastewater project a reality," Town of Ogema Mayor Carol Peterson said.  "This is an important project for Ogema, as it will help position our town for growth. Without this federal and provincial support, funding this project by ourselves as a community would've been challenging."

Chantalle Aubertin
Office of the Minister of Infrastructure and Communities
Phone: 613-941-0660
Email: Chantalle.Aubertin@canada.ca