Richardson Yorkton Canola Crush Plant Will be the Largest in Canada

The Government of Saskatchewan welcomes Richardson International Limited's new investment to double processing capacity at its canola crush plant in Yorkton, which will make it the largest in Canada.

"This is a significant investment in our province that will create local jobs, support economic recovery and help our province continue to grow," Trade and Export Development Minister Jeremy Harrison said.  "As the world recovers from the economic impacts of the pandemic, there remains a growing need for the food products Saskatchewan produces, such as canola oil and canola meal, and we appreciate this investment and expansion at Richardson's Yorkton canola crush plant, which will help meet that demand.  Our government is committed to maintaining a competitive business environment to attract these types of investments, which will benefit all Saskatchewan residents, and we look forward to working with Richardson on this important project."

"Saskatchewan is a leader in agricultural production and we welcome this investment to increase canola crush capacity in the province," Agriculture Minister David Marit said.  "We know the world wants the high quality products Saskatchewan produces, with canola oil and canola meal our top value-added exports in 2020.  This expansion of processing capacity will help Saskatchewan meet the goals outlined in our Growth Plan, which includes a target to crush 75 per cent of the canola our province produces here in Saskatchewan.

"We opened the original Yorkton plant in 2010 and at that time, it was by far the largest capital investment Richardson had ever undertaken," Richardson International President and CEO Curt Vossen said.  "Saskatchewan and Manitoba producers have responded effectively, providing growth in canola production over the years - this has given us the confidence to move forward with expansion once again.  We have appreciated the encouragement and cooperation of the rural municipality of Orkney, the city of Yorkton, and the province of Saskatchewan." 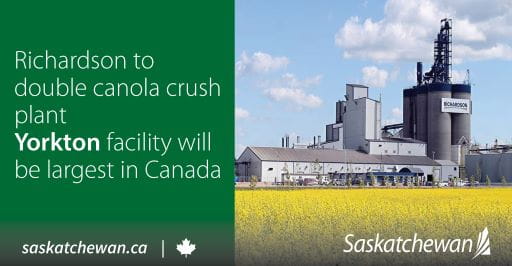 This project will help to achieve several of Saskatchewan's Growth Plan goals, including to:

Richardson plans to begin construction on the expansion immediately and is expected to be completed in early 2024.