On January 7, 2021, Ministry of Environment conservation officers in Melfort received a report of a dead deer found on the laneway of a rural property west of Star City.

Officers investigated and discovered 10 dead white-tailed deer on the property.  The owner of the property was interviewed and admitted that he had shot multiple deer between January 1 and January 6, 2021.

He stated that he had shot the deer as they were causing damage to trees and shrubs on an adjacent property.  The deer had all been shot at night as they came in to feed. 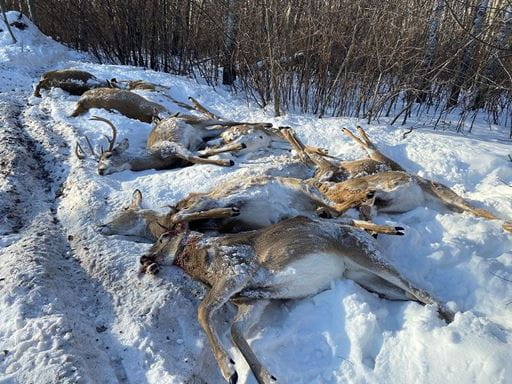 On January 10, 2021, officers responded to a second call in the same area and they located two more dead white-tailed deer.  The investigation confirmed that all had died of gunshot trauma.

Ivan L. Beuker, aged 67 of Star City, was fined a total of $15,000 in relation the offences which included:

Of note, this individual did not contact the ministry to report that he was experiencing damage to his property.

If you suspect wildlife, fisheries, forestry or environmental violations, please call Saskatchewan's toll-free Turn In Poachers and Polluters line at 1-800-667-7561, or call #5555 for SaskTel cellular subscribers.  Violations can also be reported online at www.saskatchewan.ca/tipp.

You may be eligible for cash rewards from the SaskTip Reward Program.