Seeding is virtually complete throughout the province at 99 per cent of the crop seeded, with a few fields being seeded for green feed and silage.  This is ahead of the five-year average (2016-20) of 97 per cent.

Some areas of the northern regions of the province received good amounts of rain due to a thunderstorm on the weekend; unfortunately, it brought some hail as well.  The Cando area reported 40 mm of rain, the Kinistino area 37 mm, the Rosthern area 32 mm, the Sonningdale area 27 mm, the Duck Lake and Spruce Home areas 23 mm.  Parts of the southern half of the province saw small localized showers with amounts ranging from two mm to 12 mm.

Even with the rainfall over the weekend, the topsoil moisture conditions in Saskatchewan have deteriorated.  Higher amounts of rain in the northern regions have slightly improved moisture conditions in the area, but there are more fields rated as having short or very short moisture in the remaining regions of the province this week. 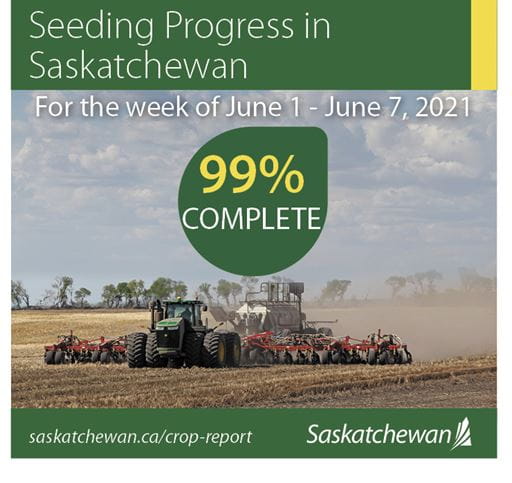 The majority of crop damage this week was due to strong winds, dry soil conditions and insects (including flea beetles and cutworms).  Some producers are reseeding due to flea beetle and cutworm damage.

Producers have been busy spraying for weed and insect control, hauling grain and moving cattle to pasture.