Saskatchewan's strong economy and balanced approach to COVID restrictions is resulting in our province having the strongest job growth and lowest unemployment rate in Canada for the second consecutive month.

According to job numbers released by Statistics Canada for May 2021, while employment nationwide was down by 68,000 or 0.4 per cent from April, the number of people working in Saskatchewan grew by 4,100 or 0.7 per cent which was the highest growth in terms of both number and percentage change among the provinces (seasonally adjusted). 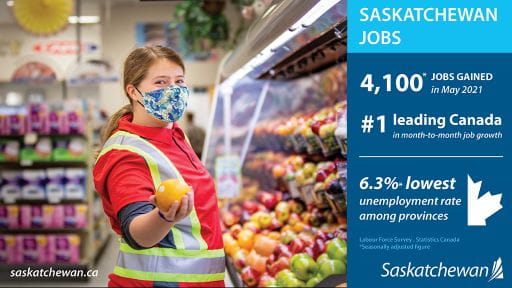 The unemployment rate fell to 6.3 per cent, down from 6.6 per cent in April and down from 12.4 per cent a year ago and was well below the national average of 8.2 per cent (seasonally adjusted).

"May's job numbers show that Saskatchewan is leading Canada's economic recovery," Immigration and Career Training Minister Jeremy Harrison said.  "Saskatchewan employers are hiring as shown by over 7,500 jobs posted currently on Saskjobs.ca, and recent private sector investments, worth billions of dollars, will create thousands of more good jobs and opportunities for Saskatchewan people in the months and years ahead."