This summer, motorists will see significant amounts of road sealing taking place across the province.  Road sealing is a cost-effective method that extends the life of roads and highways by sealing cracks formed by temperature changes throughout the year.

"Seal-coating is an effective and useful tool in all areas of the province," Minister of Highways Fred Bradshaw said.  "This method takes just a few days and lasts 10 years - a worthwhile investment in our provincial highway network."

In 2021, the Ministry plans to improve 510 kilometres of provincial roads and highways with pavement sealing, valued at over $20 million.  Ministry crews will also be completing spot sealing throughout the province.  This preventative maintenance treatment is completed on various spots to keep the moisture out of the road bed.  Without this treatment, the highways will deteriorate at a faster rate and will require more costly treatments in the future.

Pavement sealing works by covering the roadway with an oil-based substance.  A layer of gravel is then placed on top.  The mixture sits and cures for 24 hours and is then swept away by equipment, with the gravel collected for further use. 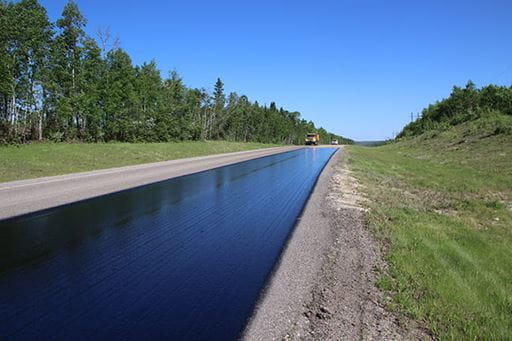 All pavement sealing sites are full construction zones with slower speed limits, additional signage and tripled speed fines.  These are in place even when workers are not present to protect drivers and their vehicles.  Speeding on the mixture can cause gravel sprays and damage to windshields, body panels and tires.

The Government of Saskatchewan is improving more than 1,350 km of provincial highways as part of its 10-year Growth Plan goal to build and upgrade 10,000 km of highways.  With this year's projects, the province is ahead of the pace needed to meet this target.