Husky Midstream's Saskatchewan Gathering System Expansion project will accommodate new shipping capacity of up to 48,000 barrels per day of crude oil production, with 62 kilometers of new pipeline and 12 kilometers of replacement pipe.  The $82 million investment near Spruce Lake will support oil production growth and broader access to export markets.  The project also created about 450 construction-related jobs at peak.

"Our government will continue supporting the development of oil infrastructure in our province to create long-term sustainable growth for our energy industry," Premier Scott Moe said.  "This project is a step towards meeting our Growth Plan targets to increase oil production by 25 per cent to 600,000 barrels per day by 2030."

The OIIP, first introduced by the Ministry of Energy and Resources in 2020, offers transferable oil and gas royalty/freehold production tax credits, at a rate of 20 per cent of eligible costs, for qualified projects that significantly increase provincial pipeline capacity. 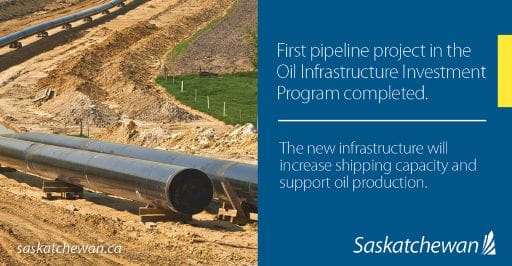 “We want to foster greater energy independence in Saskatchewan, particularly in light of the federal government’s anti-energy policies and cancellation of major pipeline projects in recent years,” Energy and Resources Minister Bronwyn Eyre said. “This pipeline expansion will increase Saskatchewan’s producers’ access to processing and export infrastructure, support growth, and decrease trucking volumes on our highways.”

Husky Midstream’s project, as well as other anticipated new and expanded pipeline infrastructure, will help alleviate record level demand for rail and truck transportation for oil and, at the same time, reduce emissions and transportation costs for the energy sector. Increased pipeline capacity will also potentially generate increased royalties and revenues for the province. Husky Midstream is operated by Cenovus Energy.

The Government of Saskatchewan will be accepting applications under the OIIP program until March 31, 2025.