Today, the Government of Saskatchewan announced support for three new projects that will reduce methane emissions, increase gas processing capacity and create jobs.  The projects qualify for the Saskatchewan Petroleum Innovation Incentive (SPII) and the Oil and Gas Processing Investment Incentive (OGPII), which provide a percentage of transferable royalty credits once private funding has been dedicated and facilities have been built.

“These projects, including one that’s first of its kind in the province, are already creating jobs,” Energy and Resources Minister Bronwyn Eyre.  “They support Saskatchewan’s economic recovery and the environment at the same time, by capturing and commercializing methane, rather than venting or flaring it.  Our SPII and OGPII incentives support oil and gas operations that want to grow and generate more value.  Most importantly, they are structured so that government funding follows private investment, it doesn’t lead.” 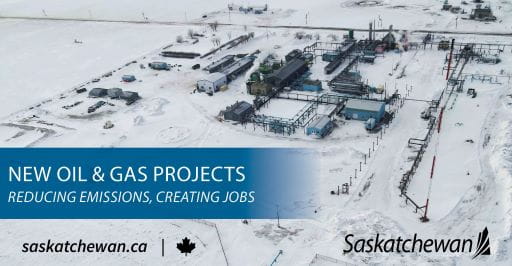 Highrock Resources Ltd., along with its joint venture partner, Kindersley based Verdera Energy, is conditionally approved in the SPII program for their approximately $1.5 million investment in a new flare-gas-to-power project, which is the first of its kind in Saskatchewan.  Executed at Highrock’s Minard oil battery, the project will repurpose a jet engine turbine and turn previously flared gas into power for onsite use.  It is expected to be operational in the winter of 2021.

“We’re excited to get to work on this innovative project and want to thank the Saskatchewan government for launching the SPII,” Highrock Resources Vice President of Land and Business Development Paul Smith said.  “This incentive allows us to partner with Verdera Energy to develop new innovative projects that help to significantly reduce emissions and help build Saskatchewan’s economy.”

Steel Reef is conditionally approved in the OGPII program for a project to expand gas processing facilities, which has already created approximately 50 local construction jobs.  This investment will add longevity and significantly increase the facility’s throughput capacity, allowing oil and gas producers to capture and sell methane gas that is brought to the surface as a byproduct of oil production.

“As a company that specializes in flare gas capture, Steel Reef is pleased to collaborate with the Government of Saskatchewan and provide innovative solutions to support its emissions reductions goals,” Steel Reef Chief Operating Officer Austin Voss said.  “These sorts of partnerships create a more sustainable and economic environment for investments in the commercial use of natural gas that was previously being flared or vented.  This is a great outcome for the economy and environment.”

Ridgeback Resources is also conditionally approved for the OGPII program to support construction of a new gas fractionation plant and supporting infrastructure near the community of Innes.  This value-added project is currently under construction, with a total investment of approximately $12 million.  Once operational, the facility will process methane gas to remove natural gas liquids and separate the liquids into products such as propane and butane for sale in the province.  The facility allows oil producers to move away from flaring and venting at oil wells as a result of the realized liquids premium associated with the natural gas liquids.

Combined, these three projects are expected to reduce provincial methane emissions by up to 251,000 tonnes of carbon dioxide equivalent per year, which is equivalent to emissions from the energy used in over 28,000 homes for a year.