The Ministry of Highways pavement marking team exceeded its 2020 targets.

This important safety investment consists of marking centre lines, edge lines, lane lines, intersection layouts and pavement signs.  The Government of Saskatchewan increased its investment in pavement marking by $1.6 million in the 2020-21 Budget.  The additional funds increased the number of kilometres marked by 13 per cent.

“Pavement marking is an important part of our governments safety strategy,” Highways Minister Fred Bradshaw said.  “I commend the highways team for its dedication to keeping the roads safe for our citizens.”

Between May and November, the crew repainted nearly 21,000 kilometres of centre lines and more than 30,000 kilometres of edge lines on Saskatchewan highways.  If all those lines were placed end-to-end, they would be more than long enough to circle the planet. 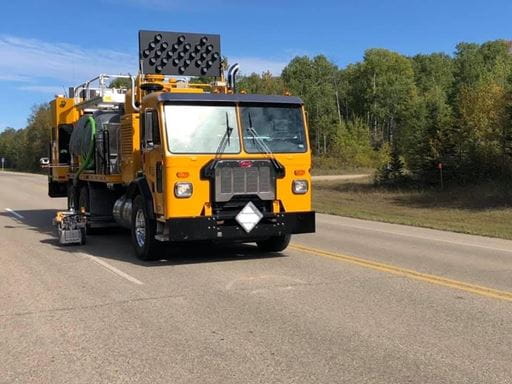 The team also painted more than 35,000 pavement signs, including arrows, medians, railroad crossings, bridge markers and crosswalks.  The crews applied more than 1.2 million litres of paint on Saskatchewan highways.  They exceeded their annual targets of 75 per cent environmentally friendly paint, using waterborne or low VOC paint on 80 per cent of centre lines and 95 per cent of edge lines.  They added 1,900 drums of glass beads to that paint, which enhances durability and improves reflectivity at night.

The pavement marking team designs and builds its own paint striping trucks, with two new trucks commissioned over the past year.  The ministry’s design provides superior performance in Saskatchewan’s harsh climate at reduced cost.

The Government of Saskatchewan is meeting its target of improving more than 1,000 km of provincial highways this year, the first of its 10-year Growth Plan goal to build and upgrade 10,000 km of highways.  Another $300 million in highways stimulus funds is being invested over two years in thin-membrane surface upgrades, passing lanes and improvements to municipal roads and airports.