A Beauval man was recently fined $14,500 in Beauval Provincial Court after pleading guilty to multiple fisheries and wildlife charges. The case was the result of a three-year investigation that began with a tip about illegal fish trafficking, ultimately uncovering other offences including unlicensed outfitting and trafficking of wildlife parts.

On November 17, 2021, Roger McCallum Jr., 36, pleaded guilty to several charges under The Fisheries Act, The Wildlife Act and The Outfitter and Guide Regulations: 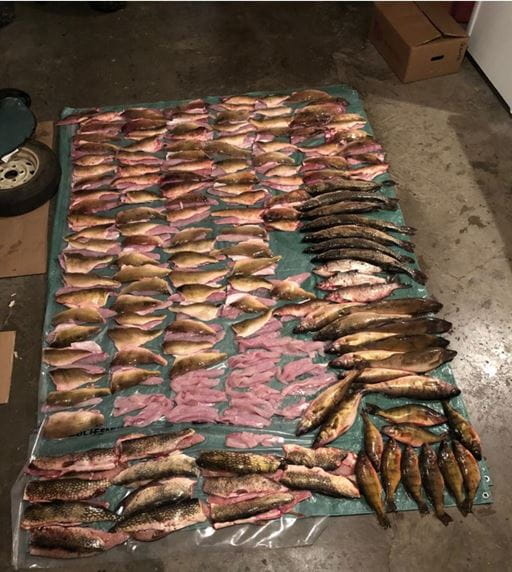 The investigation began in 2018, when Ministry of Environment conservation officers received information about illegal fishing and trafficking in the Beauval area. Officers confirmed that McCallum was involved in trafficking large quantities of fish. As well, undercover officers saw McCallum toss a large amount of edible fish into the landfill to waste.

During the investigation, conservation officers also discovered that McCallum was trafficking in bear gall bladders. On one occasion, he sold a bear gall to an undercover officer and then attempted to recruit the officer to sell bear gall bladders for him.

McCallum was also illegally offering guided fishing trips. In September 2019, undercover officers booked and paid McCallum to guide them on Lac La Plonge, which has an angling limit of three trout per person to help protect fish populations. However, during this trip, McCallum set two gill nets that caught a large amount of lake trout. He then gave the officers 29 fish, which he included in their guiding fee.

Overfishing and poaching can decimate entire lake populations, affecting commercial fishing, recreational angling and those who depend on the fish to feed themselves and their families.

If you're approached to buy fish and think the sale may not be legal, or if you suspect other wildlife, fisheries, forestry or environmental violations, please call Saskatchewan's toll-free Turn In Poachers and Polluters (TIPP) line at 1-800-667-7561, or call #5555 from a SaskTel cellular device. You can also report online at saskatchewan.ca/tipp.