Saskatchewan’s deficit is up $126.5 million due to significant agricultural support of over $700 million to address wide-spread drought conditions.

Higher expenses are offset somewhat by increased revenue from higher than expected oil and potash prices and from higher federal transfers.

"Recent commitments to help our farmers through the emerging drought, has affected the province's fiscal situation," Deputy Premier and Finance Minister Donna Harpauer said.  "However, higher oil and potash prices and increased federal transfers have helped to combat the increase in the projected deficit."

Revenue is forecast to increase from budget by about $757 million (5.2 per cent).  About $360 million of this revenue increase is from non-renewable resources- primarily due to higher oil and potash prices.

Federal transfers are also up by about $401 million from budget, including almost $132 million for early learning and child care, about $124 million for Saskatchewan's share of the Helping Our Health Systems Recover program and about $63 million in one-time top-up funding for the Canada Community-Building Fund.

Total expense is up about $884 million (5.2 per cent) from budget.  Nearly $707 million of that forecast increase is due to pressures in the agriculture sector and includes higher crop insurance expense of about $588 million (bringing the total crop insurance indemnity forecast to $1.1 billion this year), as well as $119 million to help producers maintain breeding stock and address the high costs they face due to drought conditions.

"A number of our other key economic indicators have also shown improvement since budget, and Saskatchewan continues to have the second-highest overall credit rating among Canadian provinces," Harpauer said.  "We are pleased that the major rating agencies continue to have confidence in our government's fiscal and budgetary approach as we respond to the significant challenges posed by drought and by the global COVID-19 pandemic."

Saskatchewan also has the lowest net debt to GDP among the provinces, at March 31, 2021. 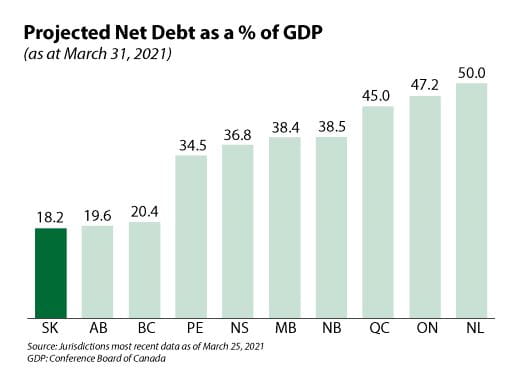