Producers have been making the most of the weather this week and 20 per cent of crop is now combined and in the bin.  Harvest is progressing very quickly and is well ahead of the five-year average (2016-2020) of four per cent.  Five per cent of crop is swathed and 14 per cent is ready to straight combine, ahead of the five-year average (2016-2020) of seven per cent.  Some producers have indicated that yields are worse than they expected while those who got timely rains are reporting they are seeing yields closer to average. 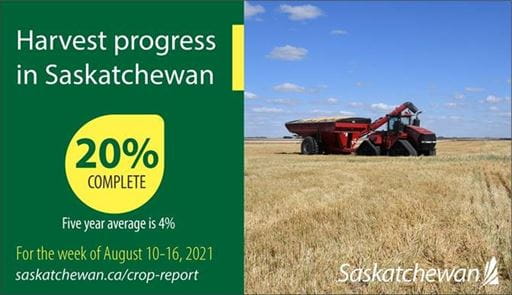 Not many parts of the province received significant amounts of rainfall this week.  The most rain received this week was in the Lipton area where 20 mm was recorded.  The Meacham area received 11 mm, the Nipiwin area eight mm, the Raymore area seven mm and the Bigger area three mm.  The rain will not make any difference in the crop yield for this year; producers impacted will be delayed from combining but are happy to finally see rain.  Pastures that no longer have cattle on them will benefit from the rain and have a chance to recover from the severe drought conditions of the season.

Crop damage causes this week remain the same with the majority from wind, heat, drought stress, gophers and insects such as grasshoppers and flea beetles.

Farmers are busy getting equipment and bins ready for harvest, swathing and desiccating crops and combining, which is well underway in almost all areas of the province.

With harvest underway in Saskatchewan, we want to remind producers to exercise caution while moving machinery and equipment across major and secondary highways.  Concern around fires is very high and farmers are reminded to ensure firefighting equipment is close by to stop any combine or field fires from getting out of control.

In response to the drought, the province last week announced an AgriRecovery response to provide a per head payment to help maintain female breeding stock.  Details and information on how to apply are being finalized and will be shared as soon as possible.  Note that producers don't have to be enrolled in any existing programs to qualify for funding.  As details are finalized, producers can check www.scic.ca for updates, or contact their local Saskatchewan Crop Insurance Corporation (SCIC) office or call toll-free at 1-888-935-0000.

Producers are also reminded that in response to the feed shortage this year, SCIC doubled the Low Yield Appraisal threshold values for customers who salvage their cereal or pulse crops as feed, without negatively impacting future individual coverage.  Customers are asked to contact their local SCIC office before they graze, bale or silage any damaged crops to discuss their options.

Additionally, the Government of Saskatchewan made changes to temporarily increase the maximum funding a livestock producer can receive from the Farm and Ranch Water Infrastructure Program (FRWIP) for dugouts, wells and pipelines for agricultural use.  Producers can contact the Ministry of Agriculture's Agriculture Knowledge Centre at 1-866-457-2377 for information.

The federal and provincial governments have also increased the 2021 AgriStability interim benefit payment percentage from 50 per cent to 75 per cent for Saskatchewan producers.  The interim benefit provides the opportunity for producers enrolled in AgriStability to access a portion of their benefit early, to help support losses and cover costs.  To apply for an interim benefit, producers can contact their local SCIC office, call the AgriStability Call Centre toll-free at 1-886-270-8450, or email agristability@scic.ca.

The Farm Stress Line is available for support 24-hours-a-day, seven-days-a-week, toll-free at 1-800-667-4442.  Calls are answered by Mobile Crisis Services Regina, a non-profit, community-based agency and there is no call display.