The governments of Canada and Saskatchewan continue to invest in infrastructure during this unprecedented time to enhance citizens' quality of life, meet the needs of communities and create jobs to address the impact of COVID-19.

The SaskWater Highway 9 Regional Water Supply System project will construct a new water treatment plant and a 55.3 km potable pipeline that will provide service to the communities of Preeceville, Sturgis, Stenen, Hyas, Norquay, Pelly, Crystal Lake, Clayton No.333 and Keys No.303.  Initially, the proposed system will serve approximately 2,700 individuals, however it will have the potential to serve even more people, including The Key First Nation and other surrounding rural municipalities.  The project will also upgrade existing groundwater wells, a wastewater lagoon, potable water storage and distribution pumps, as well as install a non-potable pipeline and establish connection points for delivery for each community.

In Strasbourg, Rowan's Ravine Provincial Park will reconstruct its single cell facultative lagoon into a two-cell lagoon complete with synthetic, high-density polyethylene liners.  Project works will include raising existing berms and rehabilitating various existing structures.  The new lagoon will bring the park up to speed with federal and provincial wastewater treatment regulations and provide Rowan's Ravine with the capacity to meet current and future park needs.

Providing communities with reliable and sustainable infrastructure is a shared priority for both governments.  The governments of Canada and Saskatchewan are investing more than $23.6 million toward these projects through the Investing in Canada Infrastructure Program's Green Infrastructure Stream.  Canada is contributing over $12.7 million and Saskatchewan is funding over $10.8 million.  Proponents are also contributing more than $7.7 million.  Funding recipients are responsible for any additional project costs. 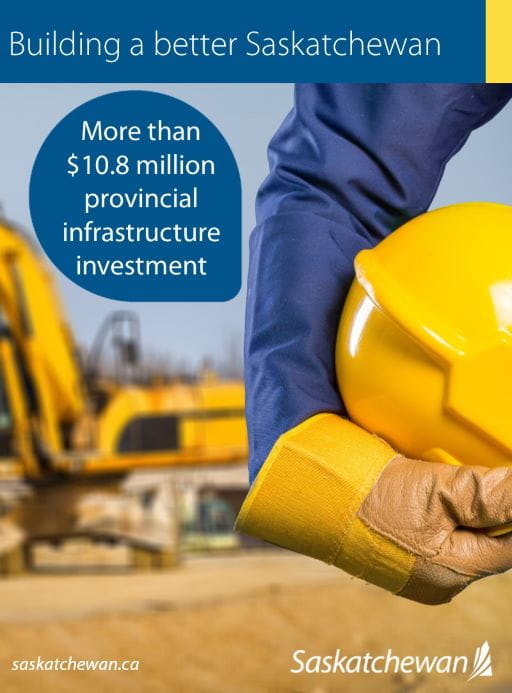 "This federal investment of over $12.7 million will help communities in Saskatchewan upgrade their drinking and wastewater infrastructure," Carr said.  "Investing in high-quality water infrastructure that will last and meet the growing needs of the population is a key part of building healthy, resilient communities in Saskatchewan, and across Canada."

Emelyana Titarenko
Office of the Minister of Infrastructure and Communities
Phone: 873-355-9576
Email: emelyana.titarenko@infc.gc.ca