"Our Saskatchewan producers are known worldwide for the safe, high-quality commodities that they produce. We are excited to see the economic activity and jobs that this announcement will create for our province," Premier Scott Moe said.  "This announcement aligns with our Growth Plan goals, bringing us to our target to crush 75 per cent of the canola produced in our province at home in Saskatchewan."

Construction on the new 2.5 million metric tonne (MMT) canola processing plant is expected to begin in early 2022 with production underway in 2024.

"This significant announcement from Viterra - a grain company with proud roots here in our province that go back nearly a century - is good news for jobs and our world-leading agriculture sector in Saskatchewan," Trade and Export Development Minister Jeremy Harrison said.  "With the most innovative growers in the world, a burgeoning agriculture value chain, and competitive business environment, Saskatchewan is poised for strong export growth in canola oil and meal in the months and years ahead." 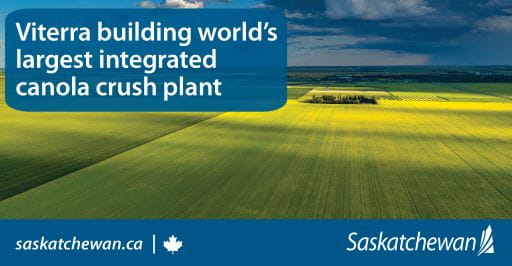 "We are pleased to see that Viterra has selected Saskatchewan as the location for their new canola crush facility and we are excited for the opportunity this creates for our provincial economy," Agriculture Minister David Marit said.  "Increasing canola crush capacity in Saskatchewan will benefit both our canola producers and the innovative companies like Viterra who recognize our industry for the high-quality and reliability that we are known for around the world."

"We are pleased to have the opportunity to pursue this substantial and historic investment in our asset network, which demonstrates our confidence in the future of western Canadian canola production," Viterra CEO for North America Kyle Jeworski said.  "Through this project, we will be able to further leverage our strong relationships with farm customers and support Saskatchewan's growth plan for expanded value-added processing capacity.  Further, this project will have a long-lasting and positive local economic impact, both in terms of employment related to the facility's construction and permanent employment once the plant is up and running."

The new Viterra canola crush plant facilitates meeting the goal in Saskatchewan's Growth Plan to crush 75 per cent of the canola produced in the province.  It will also support Growth Plan goals to grow Saskatchewan's agri-food exports to $20 billion, increase agriculture value-added revenue to $10 billion, increase the value of exports by 50 per cent and grow private capital investment in Saskatchewan to $16 billion annually.