This is the first of six oil and gas public offerings for the 2021-22 fiscal year.

The Estevan area was the major focus for bid activity, with leases within the region receiving both the highest bonus bid for a parcel of land as well as the highest dollars per hectare on a lease. 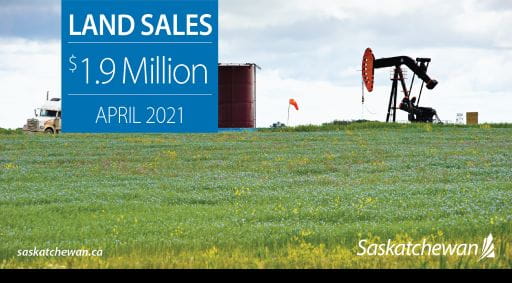 The highest bonus bid received on a parcel in this offering was $324,786.00 (or $627.00 per hectare) for a lease in the Estevan area.  This lease totalling 518.000 hectares was awarded to Cougar Creek Land Ltd. and is prospective for oil in the Bakken Formation.

The highest dollars per hectare received in this offering was for a 64.8-hectare lease in the Estevan area by Crescent Point Energy Corp.  They bid $220,554.04, or $3,406.24 per hectare, for this parcel that is prospective for oil also in the Bakken Formation.

The scheduled date for the next public offering is June 1, 2021.