A major intersection safety improvement on Highway 1 near Kalium Road, east of Moose Jaw recently opened up to traffic.

“Safe and efficient travel is crucial for the movement of people and goods,” Highways and Infrastructure Minister Greg Ottenbreit said.  “This year’s intersection safety improvement projects include new turning lanes, lighting, clearing of sight lines and installation of rumble strips.”

The $5.2 million project at Kalium Road includes the addition of high-speed entrance and exit ramps, which will move turns away from the intersection to help travelers make left turns safely.  The project also includes extending the turning lanes on Highway 1.  There will be a transition period as temporary signs are replaced with more permanent signage.  Drivers are reminded to watch for workers and equipment during this time and to obey posted speeds. 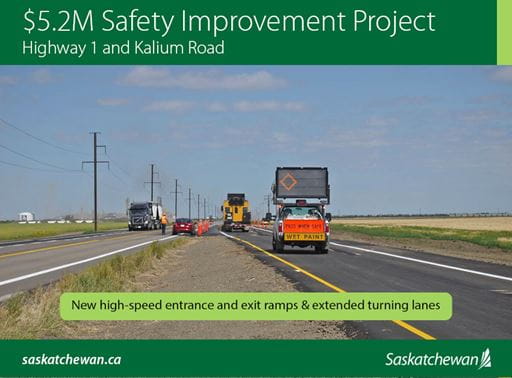 The Kalium Road project is one of more than 60 intersection improvements announced in the spring of last year and is part of a five‐year $100 million commitment to enhance safety province-wide.

A weekly highway construction update is also published on www.saskatchewan.ca/residents/transportation/highway-construction-projects/weekly-highway-construction-update to provide the travelling public with the latest details on projects underway to help plan safe and efficient travel.  You can also report a highway work zone signing problem by calling 306-244-5535.

The Government of Saskatchewan will improve more than 1,000 kilometres (km) of provincial highways this year, the first of its 10-year Growth Plan goal to build and upgrade 10,000 km of highways.