Producers made significant harvest progress this week with 43 per cent of the crop now in the bin, up from 28 per cent last week and remaining well ahead of the five-year (2015-2019) average of 35 per cent for this time of year.  An additional 29 per cent of the crop is swathed or ready to straight-cut. While rain in some eastern and northern areas delayed harvest progress, the majority of the province continued harvest operations this week.

The southwest region continues to have the most progress in the province with 71 per cent of the crop now combined.  The southeast region has 59 per cent combined, the west-central 38 per cent, the east-central 29 per cent, the northeast 17 per cent and the northwest seven per cent. 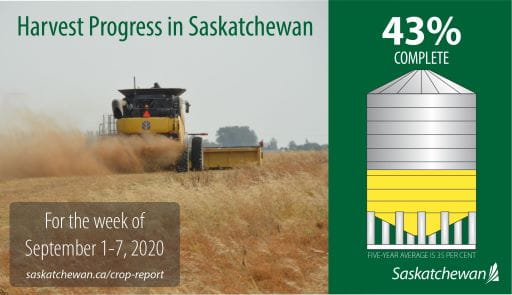 The majority of crop damage this past was due to strong winds, lack of moisture and frost.  Most of the province received a hard frost earlier this week that caused damage to later-seeded and immature crops.  Producers are assessing the damage to determine the potential impact.  As field conditions remain very dry in some areas, seeding of winter cereals will be minimal this fall.  Strong winds continue to blow swaths and shell standing crops.

With harvest underway in Saskatchewan, we want to remind producers to exercise caution and remain safe.