There were 4,700 more jobs in Saskatchewan in August compared to July (seasonally adjusted).

Saskatchewan’s unemployment rate in August was 7.9 per cent (seasonally adjusted), the lowest among the provinces and well below the national rate of 10.2 per cent. 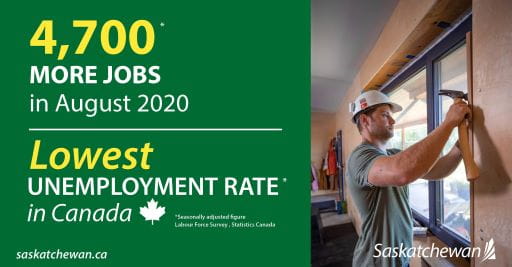 “Our provincial economy is demonstrating the strongest recovery in the country from the challenges of the COVID pandemic and it’s thanks to the hard work of Saskatchewan people,” Immigration and Career Training Minister Jeremy Harrison said.  “With the lowest unemployment rate in the nation, it’s clear people are getting back to work and helping our economy recover and grow.”

Employment is now at 95.7 per cent (555,800 jobs) of its pre-pandemic level in February (580,700 jobs) (seasonally adjusted).  Saskatchewan’s job recovery rate is third highest among the provinces, behind only New Brunswick at 96.4 per cent and Manitoba at 95.9 per cent, and above the national recovery rate of 94.3 per cent.