Harvest continues to quickly advance thanks to warm and dry weather in most areas of the province.  Crops are rapidly drying down and the majority of producers are now in the field.  Twenty-eight per cent of the provincial crop is in the bin, up from 15 per cent last week and well ahead of the five-year (2015-2019) average of 22 per cent for this time of year.  An additional 27 per cent of the crop is now swathed or ready to straight-cut. 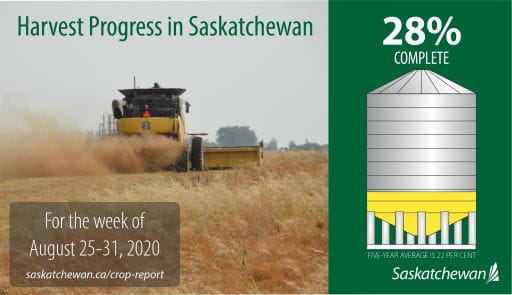 The majority of the province did not receive significant rainfall last week, although some areas reported close to 25 mm.  The Hudson Bay area reported the highest amount of rain this past week with 37 mm.

Most crop damage this past week was due to diseases such as ergot, lack of moisture and strong winds blowing swaths around.  There were some reports of light frost but damage appears to be minimal.  Many producers have reported field and combine fires due to the dry conditions.  Reported yields so far are about average with some areas indicating that yields will be less than anticipated due to the hot and dry conditions over the past few weeks.

With harvest underway, we want to remind producers to exercise caution and remain safe this season.